Decadal Decreases in the Frequency (Pitch) of Baleen Whale Vocalizations 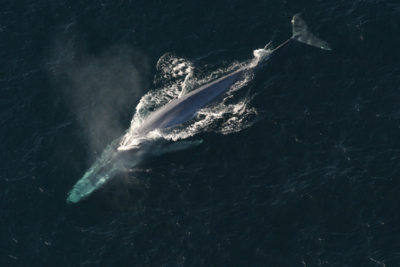 Blue whales are the largest living mammal species. Their long, slender bodies can reach lengths of 30.5 m (100 ft) and weigh up to 160 tons. Blue whales produce stereotyped calls, described as pulses, grunts, groans, and moans, which are typically in the 15-40 Hz range. Image credit: NOAA Fisheries.

Baleen whales (mysticetes) are large cetaceans found throughout the global ocean. They include species such as humpback, blue, fin, bowhead, and gray whales. Although they are not known to echolocate, baleen whales produce a variety of underwater sounds to communicate, navigate underwater, and/or otherwise understand their environment. Through the use of passive acoustics, scientists have discovered that some of these vocalizations have changed over the last several decades, decreasing in frequency (Hz).

The baleen whale species for which this frequency shift has been documented most extensively is the blue whale. These whales produce a variety of low frequency, high intensity sounds that can propagate over long distances. The frequency of blue whale songs has been steadily declining since the 1960s, and this trend has been noted across multiple populations, though at different rates. The North Pacific blue whale song has been monitored extensively using underwater hydrophones, seismometers, and other passive acoustic devices. In 1963, the North Pacific blue whale song had a mean frequency at the third harmonic of 65.7 Hz, whereas in 2008, the frequency at the third harmonic was measured to be 45.5 Hz. Moreover, the fundamental frequency of the song shifted from 21.9 Hz in 1963 to 15.2 Hz in 2008. This is a 31% decrease in fundamental frequency[1]McDonald, M., Hildebrand, J., & Mesnick, S. (2009). Worldwide decline in tonal frequencies of blue whale songs. Endangered Species Research, 9, 13–21. https://doi.org/10.3354/esr00217.. 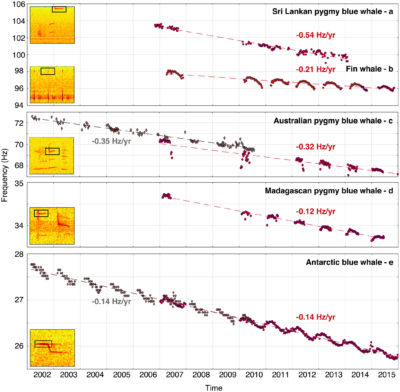 Decadal decline in frequency (Hz) for blue, pygmy blue, and fin whale vocalizations in the southern Indian Ocean. A spectrogram insert for the features of each call that was analyzed ins included in the lower left. Reprinted with permission from Leroy et al. 2018.

This study (Leroy et al. 2018) also documented seasonal frequency shifts in Antarctic blue whale vocalizations. The whales increased the frequency of their calls by 0.2-0.3 Hz from October through February, which corresponds with the austral summer. These shifts are believed to be linked to seasonal variations in ambient noise levels, such as the increase in sounds associated with icebergs during the austral summer. The whales may need to call louder to be heard over the sounds of cracking ice; as their call intensity increases, so does its frequency.

Although a consistent decrease in the frequencies of baleen whale vocalizations has been observed for multiple species around the globe, the reason for these changes remains unclear. It is difficult to determine the causes of these decadal-scale variations, as there is limited knowledge on the population structure for many of these species. Understanding long-term, changes in acoustic behavior is needed, however, in order to establish population identities and metrics for hard-to-study and/or endangered cetaceans, such as blue and fin whales.