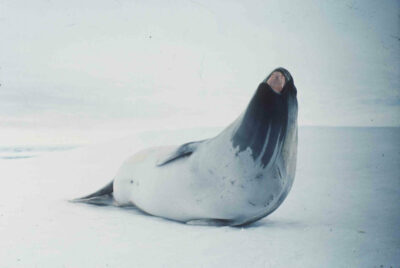 The Ross seal (Ommatophoca rossii) is the smallest of the Antarctic pinnipeds, which also include Weddell, leopard, crabeater, and southern elephant seals. Ross seals have slender bodies with a thick neck, blunt snout, short vibrissae, and large eyes. Their coat is dark gray or black on the ventral surface, while their bellies are white. They also have distinct, alternating dark and sliver streaks starting at the lower jaw and extending along their neck, chest, and sides.

Ross seals have an Antarctic circumpolar distribution. It was once thought the species only remained in the Antarctic pack-ice zone; however, tracking studies show that Ross seals spend several months each year foraging in the lower latitude, open waters of the Southern Ocean. They mainly feed on squid, mesopelagic fishes, and krill. The seals return to the pack-ice zone for pupping and breeding (November and December) and again during molting (January to March).

Ross seals are the least studied Antarctic pack-ice seal species. They are difficult to study using traditional, ship-based, visual survey methods as they are widely dispersed and haul out in areas of dense pack ice. Passive acoustic monitoring has therefore become a useful tool to determine the spatial distribution of Ross seals and better define their habitat use.

Ross seals vocalize when hauled out on land and while underwater. Their underwater repertoire includes five types of documented vocalizations, the most common of which are “siren” calls. These calls consist of alternating upsweeps and downsweeps and last up to 3 s in duration. Siren calls can be further broken out into three subcategories based on minimum and maximum frequencies: high siren call (~592 – 7129 Hz), mid siren call (~168 – 2010 Hz), and low siren (~133- 440 Hz). Additional vocalizations, described as “whooshes” have also been recorded for Ross seals. These vocalizations may contain a tonal element (single tonal centered around 583 Hz) and/or a broadband element (downsweep from ~11000 Hz to 1439 Hz). 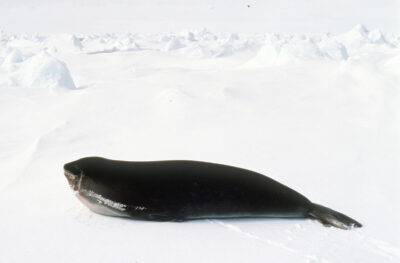 The functions of Ross seal vocalizations are unknown. However, data gathered through the Perennial Acoustic Observatory in the Antarctic Ocean (PALOA) detected Ross seal calls from December through February, coincidental with mating and the species’ subsequent molting season. Calling activity was found to also occur each day in a diel pattern with increased vocal activity recorded later in the afternoon through the evening.