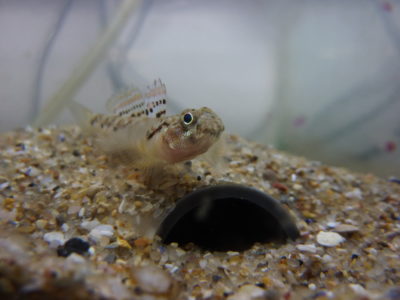 The painted goby is a relatively small, benthic fish that is found along sand/gravel bottoms in the Eastern Atlantic Ocean and the Mediterranean Sea. Male gobies produce underwater sounds in association with reproduction and agonistic behaviors. Here, a goby is in close proximity to a nest site (laboratory setting). Image credit: M. Clara P. Amorim and Paulo J Fonseca, Science Faculty, University of Lisbon Portugal.

Gobies are one of the largest families of marine fishes, containing more than 2,000 species. Many gobies produce vocalizations, especially during reproductive behaviors. The painted goby, Pomatoschistus pictus, is a small (<6cm), benthicspecies of goby found along the sandy/gravel bottoms of shallow (1-50m) waters in the Eastern Atlantic Ocean and the Mediterranean Sea. Reproduction takes place from January through July, depending on location. Like other goby species, male painted gobies establish territories and build nests. Females enter the nest, attracted by male displays, and lay their eggs in a single layer on the ceiling of the nest. The male provides parental care for the eggs. Males compete aggressively over nesting sites during the breeding season and actively defend their nest from other male intruders.

Male painted gobies attract females using a series of elaborate visual displays, most of which are also associated with vocalizations. Sounds associated with courtship and nest defense activities have been recorded and described for male painted gobies in captivity. “Thumps” are short (~ 80ms), non-pulsed, low frequency sounds (peak frequencies below 100 Hz, with most sound energy under 1kHz) produced in bursts and bouts (groups of bursts). “Drums” are longer (700 ms on average) and consist of low frequency pulse trains (170 Hz dominant frequency) made up of 27 pulses, on average, and repeated ever 24 ms at c. 16ºC (pulse period depends on water temperature).

Most thumps are produced when males are alone in the nest (nest display) and a female is nearby. During this behavior, a male has his body inside the nest and his head outside the nest. Thumps are also produced when a male is courting a female outside the nest. Drumming sounds are produced during quivering displays inside and outside the nest, and during territorial defense (agonistic interactions). Courtship and agonistic drums differ in their duration, number of pulses, pulse period and dominant frequencies. During displays associated with nest defense, drum duration and pulse number were found to increase significantly with male size. Information about an opponent’s size is important to convey during male-male assessment; larger individuals tend to be dominant and able to hold better territories.

Acoustic assessment may be also used for mate choice in the painted goby, as females may enter several nests before deciding where to lay their eggs. Laboratory studies show male courtship effort to be an important trait for mate choice, where female painted gobies preferred males exhibiting higher levels of acoustic courtship displays. Moreover, more vocal males were preferred by females. In one laboratory study, where courtship displays and female mate choice was investigated in the presence of noise, painted goby females paid more attention to visual courtship in noisy circumstances when compared to the silent control [1] de Jong, K., Amorim, M. C. P., Fonseca, P. J., & Heubel, K. U. (2018). Noise affects multimodal communication during courtship in a marine fish. Frontiers in Ecology and Evolution, 6. https://doi.org/10.3389/fevo.2018.00113.. Results of these laboratory studies should be considered with caution, however, as in a more natural setting, males have access to several females and females in turn, have an array of males to choose from. Males may also discriminate among females in a laboratory setting, adjusting their courtship activities depending on the quality of available females.

Courtship signaling, including sound production, is often considered an expensive activity in terms of time and energy. Prolonged periods of offspring care are also considered energetically expensive. Acoustic measurements in correlation with lipid analysis showed higher levels of courtship activity to be correlated with better body condition (energetic reserves) in male painted gobies. Moreover, studies indicated that those males that drummed louder and longer possessed more fats and were more successful at attracting a mate. Painted goby females may be selecting for good-condition males on the basis of acoustic traits.