Knowledge of the hearing abilities and other acoustic features of marine animals is important when measuring the effects of sound on marine animals. (For more information see How do marine animals hear sounds?). Hearing studies provide information that may be used to predict how sound sources and levels may affect animals in the wild. If an animal is unable to detect a sound or hears a sound only faintly because of its hearing range or sensitivity, it is unlikely the animal will have a behavioral reaction or hearing loss from the sound.

Hearing studies on marine mammals are conducted in three different ways: behavioral studies, electro-physiological studies, and anatomical studies. Most hearing studies are performed on animals in captivity, therefore the information that is available tends to be for the smaller marine mammals such as pinnipeds (seals, sea lions, and walruses), sirenians (manatees and dugongs), and some odontocetes (toothed whales). Hearing studies on mysticetes (baleen whales) have been limited primarily to anatomical studies and modeling because they are not kept regularly in captivity, and so far it has not been possible to successfully perform hearing tests with these animals if stranded.

Behavioral hearing studies are conducted to determine the range of frequencies and how well an animal can hear across those frequencies. The softest or lowest level at which an animal can hear a sound is called its hearing threshold for that frequency. Behavioral studies are performed with trained animals, in captivity. The animal is trained to move to a station underwater while a sound is played. If the animal hears the sound, it responds in a particular way, such as pressing a paddle. If the animal doesn’t hear the sound (or if no sound is played), it does not respond. By changing the loudness of the test signal, scientists determine the frequencies and sound levels the animal can hear. These measurements are presented as a hearing threshold curve. 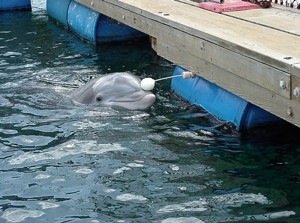 The bottlenose dolphin is touching a paddle, indicating that it heard a sound during a behavioral hearing test. Photo courtesy of Paul E. Nachtigall, Hawaii Institute of Marine Biology.

Behavioral studies have been performed on several toothed whale species including dolphins, false killer whales, killer whales (orcas), beluga whales, harbor porpoises, and several pinniped species. All species of toothed whales that have been tested hear best in high to ultrasonic frequencies (10,000 to 50,000+ Hz). Pinnipeds (seals and sea lions) hear better at frequencies lower than those heard best by odontocetes. (For more information about marine animals’ perception of sound, go to the sections on Marine Animal Sound Production and Marine Animal Sound Reception.) 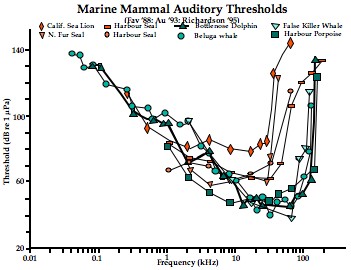 Examples of the hearing thresholds for some marine mammals. The y-axis (vertical) for the hearing thresholds is relative intensity in underwater dB. The x-axis (horizontal) is the frequency of a sound on a logarithmic scale. Figure courtesy of Darlene Ketten, Woods Hole Oceanographic Institution and Harvard Medical School.

Electrophysiological studies have also been used to determine the threshold of hearing in many animals. Auditory evoked potential (AEP) and auditory brainstem response (ABR) tests measure the neural responses of the auditory system, from the inner ear to the auditory cortex, to a sound stimulus. During these studies, small electrodes placed on the surface or just below the skin of the animal record the voltages produced at different points along the auditory pathway. The results are plotted as a curve of the amplitudes of responses over time, and are called short, middle and long latency responses. The first five peaks of the AEP or ABR correspond to responses from first the auditory nerve near the cochlea, then in the auditory brainstem.  The later peaks represent responses as far as the auditory cortex in the temporal lobes of the brain. The height or amplitude of the response represents how well an animal hears a sound.

These tests are important tools because they can be done quickly and do not require any training compared to the extensive training and expense necessary for captive animal behavioral hearing tests.  Differences in the response magnitude and timing (the latency) compared to normal hearing can help determine if an animal is hearing impaired and where in the auditory path a problem occurs.  Comparison of the results of behavioral responses and AEP/ABR tests (conducted on the same individuals) typically shows some differences in sensitivity but similar hearing curve shapes and frequency ranges.[1]Szymanski, M. D., Bain, D. E., Kiehl, K., Pennington, S., Wong, S., & Henry, K. R. (1999). Killer whale (Orcinus orca) hearing: Auditory brainstem response and behavioral audiograms. The Journal of the Acoustical Society of America, 106(2), 1134–1141. https://doi.org/10.1121/1.427121. Both are valuable for assessing marine mammal hearing [2]Houser, D. S., Gomez-Rubio, A., & Finneran, J. J. (2008). Evoked potential audiometry of 13 Pacific bottlenose dolphins (Tursiops truncatus gilli). Marine Mammal Science, 24(1), 28–41. https://doi.org/10.1111/j.1748-7692.2007.00148.x. 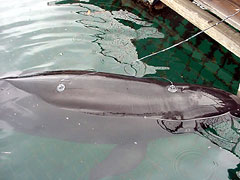 Behavioral and electrophysiological studies in controlled experiments can also be used to study whether an animal’s hearing changes after exposure to various sounds (For more information see Hearing Loss).