How do marine mammals use sound to navigate?

Sound plays an important role in marine mammal navigation. It may be critical when other senses are of limited use.

Echolocation by odontocetes (toothed whales) has been extensively investigated. They produce a rapid series of clicks and the return echoes provide important information about objects in their vicinity (for more information, please visit the page on Marine mammal feeding). Deep diving sperm whales produce a series of clicks at the start of their dives. The interval between their clicks is consistent with detecting multiple elements of their environment, including distance to the seafloor or to the surface.

Migrating bowhead whales may use acoustic cues to detect ice presence and thickness. The migratory path of bowhead whales takes them under the Arctic pack ice. Their migration begins in winter when there is little to no sunlight and often no open water. Along their route, the whales use the arched area around their blowhole to push up against the ice, break through it, and create breathing holes/cracks. When looking at the acoustic properties of bowhead whale sounds and the scattering properties of different stages of ice, scientists concluded that the whales’ calls would reflect differently off a thick ice floe or ice keel versus an area of thin ice. This perceived difference could allow whales to detect thin, new ice that would be better suited for breaking. 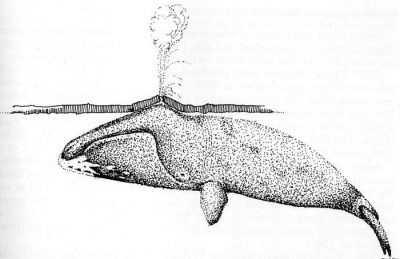 Bowhead whales use the arched area around their blowholes to push up on pack ice and break it, creating a fracture and/or hole (hummock) through which they can breathe. Illustration credit: Craig George, Department of Wildlife Management, North Slope Borough, Barrow, Alaska. 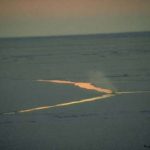 Ice seals such as Antarctic Weddell seals and Arctic ringed seals mate and give birth in areas dominated by continuous ice cover. The seals create and maintain breathing and haulout holes in the ice and must be able to reliably relocate these holes after under-ice trips. Weddell seals have been found to return to a given breathing hole after underwater trips of 2 km (1.2 miles) or more under sea ice 2 m (6.6 ft) thick. Although it is hypothesized that the seals use visual landmarks to navigate and can also locate areas of thin and thick ice by visually scanning the water surface and looking for differences in light patterns, during periods of dark, the seals must use another means to locate their breathing holes. Scientists conducting experiments with blindfolded Weddell and ringed seals found that the animals could accurately locate holes when sounds such as tapping, water splashing, and/or scratching, were produced in the vicinity of the hole. Without these acoustic cues, the blindfolded seals were unsuccessful at locating the breathing holes. 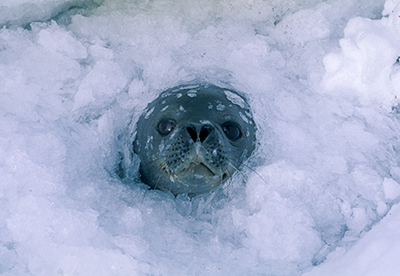 Weddell seals create and maintain breathing holes in the ice. They may use acoustic cues to help relocate these holes after they have made trips under the ice. Image credit: Michael Cameron, NOAA.