Controlled exposure experiments are a field method in which controlled doses of sound are transmitted to focal animals for the purposes of assessing their behavioral and/or physiological responses[1]Gordon, J., Thompson, D., & Tyack, P. (2003). Proceedings of the workshop: The use of controlled exposure experiments to investigate the effects of noise on marine mammals: scientific, methodological, and practical considerations. European Cetacean Society Newsletter, No. 41–Special Issue Feb. 2003, 24.. The scientist controls the amplitude, frequency, and other characteristics of the sound. The levels to which the animals are exposed are limited to avoid harming them. During the experiments the sound can be transmitted by sound sources, such as sonars or airguns. Alternately, underwater speakers transmitting pre-recorded sounds can be used. This method is often referred to as a “playback” experiment, because previously recorded natural or anthropogenic (human-generated) sounds are being played back to the animal.

The purpose of controlled exposure experiments is to observe an animal’s untrained, naturally occurring responses to a particular sound. This involves comparing animal behavior when no sound is being transmitted to the behaviors that occur when the animals are exposed to sound. Observations can be obtained from visual surveys and behavioral observations, tags, and passive acoustic monitoring. Using a combination of all three methods will provide the most complete picture.

Sound exposure studies can involve several experiments in order to isolate the cause of the animal responses. An example would be a series of sound exposures in which the sound level near the animal is changed. Animal responses in relation to the amplitude of the received sound can then be studied. One controlled exposure experiment investigated the change in the diving behavior of humpback whales as the level of the sound to which the animals were exposed increased[2]Frankel, A. S., & Clark, C. W. (1998). Results of low-frequency playback of M-sequence noise to humpback whales, Megaptera novaeangliae , in Hawai′i. Canadian Journal of Zoology, 76(3), 521–535. https://doi.org/10.1139/z97-223. The researchers found humpback whales slightly increased their dive time and travel distance as acoustic thermometry of ocean climate (ATOC) sound levels increased. Another type of study includes a series of sound exposures in which the sound source is placed at different distances from the animals. This helps determine if the animals are reacting to the sound or to the physical presence of the sound source. In this type of experiment, the sound level being received by the animals should remain constant as the source is moved away from the animals. These different types of experiments enable scientists to understand whether animals are more responsive to the location of the sound source or how loud the sound appears. 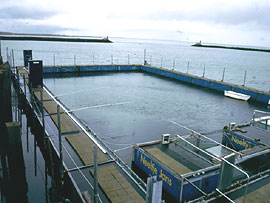 A floating pen was used to study if sounds from an underwater acoustic data communication network affected the behavior of harbor porpoises. During these controlled exposure experiments, the effect of different sounds were evaluated by comparing the animals’ positions and respiration rates during a test period with those during a baseline period. Photo courtesy of Ron Kastelein, SEAMARCO (Sea Mammal Research Company).

The effects of sound exposure are measured using both captive and free-ranging animals. The captive setting provides greater knowledge of the animal’s typical behavior and provides greater control over sound exposure. Close observations provide immediate information about reactions to the sounds, so the risks of unanticipated harm to the animals are minimized. For example, the effect of the sounds from an underwater data communication network on the behavior of two captive harbor porpoises was studied in a floating pen[3]Kastelein, R. A., Verboom, W. C., Muijsers, M., Jennings, N. V., & van der Heul, S. (2005). The influence of acoustic emissions for underwater data transmission on the behaviour of harbour porpoises (Phocoena phocoena) in a floating pen. Marine Environmental Research, 59(4), 287–307. https://doi.org/10.1016/j.marenvres.2004.05.005. The diving behavior and location of each porpoise was recorded during a 15-minute control period followed immediately by a 15-minute test period. With this experimental design, the location and diving behavior of each porpoise could be described in detail under both conditions. Experiments with free-ranging animals are also necessary since the responses measured in captivity may not accurately mirror the responses that would occur in the wild.