The initial underwater research effort during WWII focused on antisubmarine warfare, motivated by the grim successes of the German U-boats in sinking merchant ships in American waters. Later efforts were devoted to improving the capability of American submarines against the Japanese in the Pacific Ocean.

Merchant shipping sunk by U-boats in American waters, January-July 1942. Reproduced from Lasky, 1977, as adapted from the German naval history series The U-boat War in the Atlantic, Vol. 1939-1941.

The effort focused on making careful measurements of factors that affected the performance of echo ranging systems, which came to be called “sonars” late in WWII as an acronym for SOund Navigation And Ranging. Things that affect the performance of sonar systems are described by what is now called the “sonar equation,” which includes the source level, sound spreading, sound absorption, reflection losses, ambient noise, and receiver characteristics. The following sections describe three examples of the research done during WWII:

Diffuse echoes from mid-depths in the ocean were observed on the relatively high-frequency sonars of WWII. In order to understand what might be causing these echoes, a series of experiments were conducted in 1942. A sonar transmitted 24 kHz signals downward in deep water. During daylight, scientists observed echoes from roughly horizontal layers near a depth of about 400 m. With nightfall, the observed echoes indicated that whatever was causing them rose toward the sea surface and spread over a greater depth range. The echoes migrated down again at dawn. The layer was called the “Deep Scattering Layer.” The Deep Scattering Layer was found to be present nearly everywhere in the deep ocean (See foraging behavior related to the scattering layer).

It was suspected that the gas-filled swim bladders of fish might be responsible, but biologists towing nets at the depths from which the echoes came did not catch enough fish to scatter as much sound as observed. Following WWII, research showed that the deep scattering layer was made up of small organisms, including fish and jellyfish, with gas-filled swim bladders. It was found that the discrepancy between the number of organisms with swim bladders that were caught and the intensity of the echoes occurred because these organisms were able to avoid the nets towed by the biologists. The Deep Scattering Layer proved important in the later development of acoustical oceanography because it stimulated research on fish swim bladder resonance and more recently on invertebrates, especially some types of shrimp and squid ( Examples of air and cartilaginous structures in squid and cuttlefish that act as reflectors. This research also formed the basis for fish-finding sonars.

In the spring of 1944, ocean scientists, Maurice Ewing and Joe Worzel, departed Woods Hole, Massachusetts, aboard the R/V Saluda to test a theory that predicted that low-frequency sound should be able to travel long distances in the deep ocean. A deep receiving hydrophone was hung from R/V Saluda. A second ship dropped 4-pound explosive charges set to explode deep in the ocean at distances up to 900 miles from the R/V Saluda’s hydrophone. Ewing and Worzel heard, for the first time, the characteristic sound of a SOFAR (SOund Fixing And Ranging) transmission, consisting of a series of pulses building up to its climax:

A recording of a sound in the SOFAR channel. Recorded in 2004 in the north central Pacific Ocean. The source is at 250 Hz and a depth of 750 meters, approximately on the sound channel axis. The receiver was 1000km away at a depth of 693.5 meters.

Even before WWII ended, the U.S. Navy experimented with the use of these long-range transmissions as a lifesaving tool. The notion was that survivors of a downed aircraft or sinking ship could drop a small explosive charge set to explode in the ocean sound channel. The arrival times of the signal at a number of widely-spaced, on-shore listening stations could then be used to compute the position of the life raft. The project was called SOFAR (for SOund Fixing and Ranging), giving the SOFAR channel its name. 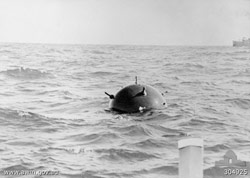 Noise that interfered with the ability to hear underwater sounds had been a problem since the early 1900s when the Submarine Signal Company first installed underwater bells near lighthouses to warn mariners of navigational hazards. However, the systematic study of ambient noise did not begin until WWII. During WWII, acoustic mines were developed that were triggered by the sound of a passing ship. Accurate knowledge of ambient noise levels was needed in order to set the sound levels at which acoustic mines would be triggered, so that they would explode only when a ship was present. This need helped stimulate development of the calibrated receiving systems needed to measure ambient noise levels. Under the direction of Vern Knudsen, the director of the University of California Division of War Research, ambient noise measurements were made in coastal waters and harbors for frequencies from 1000 Hz to 50,000 Hz. They found that the noise level increases with increasing wind speed and wave height. For a given wind speed, the noise level decreases with increasing acoustic frequency. The curves summarizing their results became known as the “Knudsen curves.”

The dependence of ambient noise on wind speed at frequencies between roughly 1000 Hz and 50,000 Hz implied that measurements of ambient noise might be used as a tool to determine wind speed over the ocean. This principle was exploited many years later in oceanographic instruments given the name WOTAN, for “Wind Observations Through Ambient Noise.”