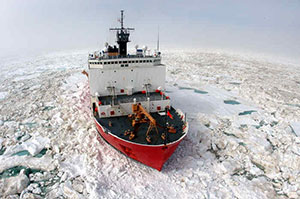 The U.S. Coast Guard cutter Healy is a United States’ polar icebreaker. The Healy is designed to break a maximum of 1.4m (4.5ft) of ice when running continuously at a speed of 3.5 mph (3 knots) and can operate in temperatures as low as -50 degrees F. Image credit: USCG. Healy page.

An icebreaker is a vessel designed to navigate through ice. Icebreakers carve paths by pushing straight into the ice, leaving a trail of open water and broken ice in their wake. When navigating thick ice, the ship may use its bow to break the ice. These ships have a strengthened hull, a specialized shape, and the power to push, break, and ram through sea ice. They may also have propellers in the bow and stern to provide increased maneuverability; pumps to move ballast water from side to side to stabilize the ship in rough seas and rock the ship to break ice; and a bubbler system that consists of holes in the hull to eject air bubbles to push ice away from the ship.

Icebreakers are used to escort other ships through ice-covered waters, free vessels trapped in ice, keep shipping channels open, and provide supplies to otherwise inaccessible polar locations. They are also important research platforms. Icebreakers have frequently cruised in the Arctic and Antarctic to research sea ice, the ocean, and the atmosphere.

Sounds from icebreaker operations are transmitted into the surrounding water and contribute to the local underwater soundscape. Two types of noise that have been identified in association with icebreakers are bubbler system noise and propeller cavitation noise. Bubbler systems blow high pressure air into the water to push away floating ice. Air bubbles produced by the bubbler systems are introduced just below the sea surface (at a water depth of approximately 2 m [6.6 ft]), thereby creating noise. While the bubbler system is operating, the noise is continuous and broadband, with highest frequencies of approximately 5 kHz. 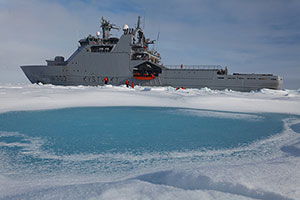 An icebreaker’s propellers produce cavitation noise, especially when the vessel rams into the ice but cannot breakthrough and is stopped, and the propellers continue to turn at full speed. Higher noise levels also occur when the propellers are operating in reverse. Like bubbler system noise, propeller cavitation noise is broadband, with a frequency range up to at least 20 kHz. Compared to other vessels, icebreakers generate higher and more variable noise levels from propeller cavitation due to the irregular nature of breaking ice, which often involves activities such as backing-and-ramming into the ice. During backing-and-ramming maneuvers, the ship’s forward progress is halted by the ice at which point the ship’s propellers are shifted into reverse, the ship backs up, and then moves forward again, ramming the ice while making forward progress.

Source levels for these types of icebreaker noise will vary from ship to ship. For the icebreaker, Henry Larsen, the broadband source level for the ship’s bubbler systems was calculated to be 194 underwater dB. The broadband source level for propeller cavitation noise was calculated to be 203 underwater dB. For the U.S. Coast Guard Cutter, Healy, source levels associated with propeller cavitation (especially during backing-and-ramming maneuvers) reached 190-200 underwater dB. Compared to open water transit, source levels increased approximately 10 dB between 20 Hz and 2 kHz when breaking ice. Specifically, noise levels increased 10-15 dB in the 50 Hz and 100 Hz bands while propellers operated in reverse.