How do you measure a marine mammal’s reaction to sound?

Although the effects of noise on people have been studied extensively, only recently has a substantial amount of effort been devoted to studying the effects of sound on animals, particularly marine mammals. A variety of methods are being applied or developed to help measure the effect of underwater sound on marine animals. This section highlights some of the methods that are used to measure a marine mammal’s reaction to sound. 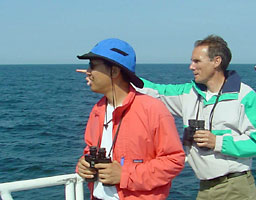 It is important to monitor an animal’s behavior before, during and after it is exposed to sound. Scientists compare baseline measurements obtained during “control” conditions to experimental conditions.

In order to measure an animal’s reaction to a sound you must first study the animal’s behavior when the sound is not present! These observations of normal behavior, which are “control” or “baseline” data, provide the reference points for measuring any changes that take place during or after sound exposure. It is important to obtain many of these baseline observations because both the typical (or average) value of the measurements and the range of natural variability must be described.

When studying the reactions of marine mammals to sound, it is important to measure as many factors as possible before, during, and after an animal is exposed to the sound of interest. Factors that are often measured include behavioral state (feeding, socializing, resting, etc.), dive duration, depth of dive, distance traveled, swimming speed, swimming direction, as well as the sounds that the animals produce. Recently, more objective physiological parameters such as heart rate have been used to gauge whether or not an animal is reacting to sound. Scientists compare the average measurements of single or multiple factors obtained during control periods to experimental conditions, taking into account the ranges of variation observed in both situations.

If the mathematical comparisons indicate that there is a statistically significant difference between control and experimental conditions, then the scientists must evaluate whether or not the responses are biologically sign[1]National Research Council (U.S.), & National Academies Press (U.S.). (2005). Marine mammal populations and ocean noise: determining when noise causes biologically significant effects. Washington, D.C: National Academies Press.. This is often more difficult and controversial than the mathematical analysis. Several factors must be considered, such as: How long did the response last? Was the average response within the range of the animal’s normal behavior? How much extra energy did the animal spend because of the response? How many behaviors are affected? Biologists use the answers to consider the impacts on the animal’s survival and reproduction. For example, temporary changes in the dive behavior of a single animal are not as biologically significant as many animals leaving an important feeding area for several days. The responses are more likely to be biologically important if several behaviors are affected rather than only one or two.

The following sections provide an overview of selected methods that are used to measure a marine mammal’s hearing sensitivity and reaction to sound: