How do fish hear?

Sound is an important source of information for animals living in the marine environment and all vertebrates, and many invertebrates, have evolved sensory mechanisms for detecting, localizing, and interpreting many of these sounds. The hearing system of vertebrates first arose in fishes, and this group of animals has two independent but related sensory systems to detect sound. The primary system is the auditory system (the inner ear), but detection also involves, to a lesser extent, the mechanosensory lateral line system, which is generally used to detect vibration and water flow.

While the other senses no doubt were also found in primitive fishes, detection of sound provided invaluable added information that helped fishes to survive and thrive. In considering all of the sensory abilities an animal has, it becomes apparent that each sense provides a particular type of information and thus has special roles that enable an animal to survive and thrive in its environment. For example, chemical signals provide information about the presence of other animals or materials in the environment through the odors they emit.  However, chemical signals do not provide very good directional information and work best when the receiving animal is very close to the chemical source. Similarly, touch is very useful when the animal is very close to a stimulus, but not when animals are apart. Vision provides information about objects at greater distances, but it only works if an animal is looking at the object, and it does not work well in low light environments or at night.

In contrast, sound provides animals with information about objects at distances beyond that provided by vision and in all directions. In other words, sound provides an animal with a three-dimensional “view” of its world, and this view is not hindered by currents, light levels, or even the presence of most objects (e.g., other organisms, reefs) in the environment.

Indeed, if you think about what senses give you the broadest picture of your environment, you will realize that it is hearing and not vision. While vision is very important, when you walk into a dark room you can sense a good deal about the room from the sounds you hear even if you can see nothing. The same goes for fishes and other animals — they get a great deal of information about the “acoustic scene” from their sense of hearing. Thus, in evolving very early in the history of vertebrates, hearing provided fishes with the ability to learn a great deal about their environment that would not be available from the other senses. It was only later, as fishes evolved the ability to make sounds, that hearing became useful for communication, in particular.

Fishes are approximately the same density as water, so sound passes right through their bodies, which move in concert with the traveling sound wave. Fishes have structures in the inner ear, called otoliths, which are much denser than water and a fish’s body. Otoliths are made of calcium carbonate and their size and shape is highly variable among species. 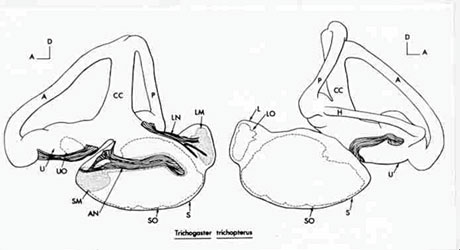 These are pictures of the left and right ears of the blue antimora (Antimora rostrata), a deep-sea cod. In the picture of the right ear (on the right), you can clearly see the three otolith organs as white objects. The saccular otolith in this species is very large and heavy. Copyright © Xiaohong Deng. www.life.umd.edu/biology/popperlab/research/deepsea.htm

Whether the re-transmitted stimulus from the swim bladder enhances hearing depends on the physical relationship between the swim bladder and inner ear. It appears that species lacking a swim bladder (e.g., elasmobranchs and flatfishes) are not particular sensitive to sounds and have a narrow hearing bandwidth because they because they do not have any way to detect the sound other than through the inner ear itself.

In contrast, the swim bladder enhances hearing in those species that have structural modifications that help conduct the sound from the swim bladder to the ear. For example, in the otophysan fishes (e.g., the carps, minnows, catfishes, and characins), the swim bladder is mechanically linked to the inner ears via the Weberian ossicles, a series of modified bones of the vertebral column (the first few vertebrae of the backbone). The Weberian ossicles are thought to move in response to sound stimuli that cause movements of the wall of the swim bladder and generally improve hearing sensitivity. For instance, goldfish hear up to 3 kHz with best hearing from 500-800Hz.

In other species, the swim bladder may extend forward so that it comes near to, or actually contacts, the inner ear. This is found in species as diverse as some squirrelfishes, some butterflyfishes, and in the Atlantic cod.  In these cases, when the re-transmitted sound from the swim bladder has to go only a very short distance, and so it is more likely to stimulate the inner ear. Many of these species can hear sounds above 1 kHz, and some, like squirrelfish, can hear as well as the goldfish and other otophysans.

Finally, fishes that do not have swim bladder extensions that bring the structure near the ear (e.g., oyster toadfish, tuna, Atlantic salmon) tend to have relatively poor auditory sensitivity, and generally cannot hear sounds at frequencies above 1 kHz. In these species, the re-transmitted stimulus from the swim bladder has little or no impact on hearing capabilities.

One of the most interesting examples of a structural modification that enhances hearing is found in the clupeiform fishes (e.g., herrings, shads, sardines, anchovies). These fishes have a pair of elongated gas-filled ducts that extend from the swim bladder and enter the skull. Each duct ends in a small bubble of compressible gas that comes in contact with a region of the inner ear, the utricle. The presence of a gas bubble in close proximity to the utricle enhances the ability of the swim bladder to stimulate the ear and thus increases hearing sensitivity to a wide range of frequencies. Most clupeids can detect sounds up to 3-4 kHz, which is substantially higher than most marine species which only detect sounds to above 1 kHz. Moreover, the American shad, as well as other fishes in the clupeiform family Alosidae, can detect ultrasonic frequencies to over 180 kHz. Behavioral experiments have shown that when American shad hear ultrasonic clicks like those of dolphins, the fish either swim in the opposite direction of the sound source or move chaotically, presumably behaviors that would make it harder for the dolphin to detect and capture the fish.

Fishes have organs called neuromasts on the skin or in hollow, water-filled canals below the skin’s surface.  The neuromasts are found in the head, trunk and tail, and are composed of hair cells that are identical to those of the inner ear. Each hair cell has a group of cilia on its surface, which are embedded in an overlying gelatinous cupula. The hair cells of a neuromast detect the relative motion of the surrounding water relative to the fish. Fishes can use the lateral line system to detect unidirectional flows and oscillatory flows (vibrations) at short range, over a distance of one to two body lengths, and at low frequencies (0- ~200 Hz).

In the lateral line canals, neuromast organs are spaced out along the length of the canal, with one organ between two adjacent canal pores. The pores link the water in the outside environment to the fluid inside the canal allowing changes in the flow field (water movement) around the fish to be detected by the neuromasts in the canal. Water movements within the canal, caused by water flows outside the canal, cause the cupulae to bend alerting the fish to nearby water movement arising from prey, predators, other members of a school, environmental obstacles, or currents.

3-dimensional interpretation of the lateral line canal (llc) on the body of bony fishes. The canal, which sits at the surface of the fish’s body, above the body musculature (m), is contained within a series of overlapping lateral line scales (s), which extend from the head to the tail (left to right in this diagram). The canal is filled with fluid and has pores (p) that link the canal fluid to the external environment. One neuromast receptor organ (n) is found in each of the short tubes within each scale (two of these tubes are shaded in grey). Movements of water outside of the canal (water flows and low frequency vibrations, generated by predators, prey, mates, or environmental sources) cause fluid movement within the canal. The very sensitive neuromasts are composed of ciliated hair cells that are covered by a jelly-like domed cupula, which bends in response to water movements within the canal. The hair cells of the neuromasts are innervated by branches of the posterior lateral line nerve (plln), which transmits information about water flows to the fish’s brain. Reprinted with permission from Webb, J. F. and J. B. Ramsay (2017). New interpretation of the 3-d configuration of lateral line scales and the lateral line canal contained within them. Copeia, 105(2): 339-347. American Society of Ichthyologists and Herpetologists (ASIH).

Have you ever seen fish swimming in a school? All the fish in the school seem to move exactly in the same direction and as one large mass. As well as involving vision, the coordinated movements of fishes within a school are the result of input of water flow information to the lateral line system. As one fish moves in a certain direction, it creates a flow of water that provides information to the fish next to it or behind it. Each fish in the school is able to use this information to accurately maintain their position within a rapidly moving school.