An international team of experts have partnered on a “bold” conservation plan (VaquitaCPR; https://www.vaquitacpr.org) to prevent the most endangered marine mammal in the world, the vaquita porpoise (Phocoena sinus), from going extinct. The vaquita is only found in the upper portion of Mexico’s Gulf of California. Its population was estimated at 567 individuals in 1997, but less than 30 individuals are thought to remain today.  The primary threat to the vaquita is bycatch in gillnets, especially that associated with the lucrative, illegal fishery for totoaba (Totoaba macdonaldi). This large, endangered fish, which is prized for its swim bladder, is roughly the same size as the vaquita. 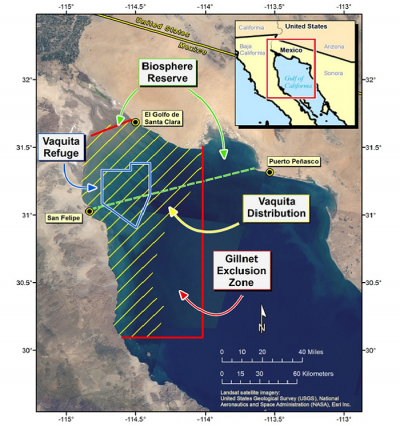 Satellite view of the northern Gulf of California with the vaquita’s distribution shown by yellow cross hatching. The gillnet exclusion zone for the gillnet ban is delineated by the red line. The Vaquita Refuge, which remains a no fishing zone, is the smaller area outlined in blue. Image courtesy NOAA, SWFSC.

A critical part of the conservation program is the acoustic monitoring. Since the vaquita is so rare and elusive, the use of passive acoustics, in addition to traditional visual survey methods, can strengthen population measurements. Passive acoustic monitoring (PAM) has been implemented since 1997 to estimate vaquita population numbers.  Anchored, boat-based acoustic detectors were deployed at random sites from 1997-2007 throughout the vaquita’s range. Over this time, there was a 58% decline in acoustic detections. In 2011, a more robust acoustic monitoring program for the vaquita began, and a systematic array of C-POD passive acoustic click detectors was deployed throughout the animals’ range.  From 2011-2015, acoustic activity declined by 80% in the central portion of the vaquita’s range, with an annual rate of decline of 34% per year.  In response to these data and with encouragement from the Leonardo DiCaprio Foundation, Mexican President Enrique Pena Nieto announced that the two-year gillnet ban throughout the vaquita’s range in the Gulf of California was being made permanent as of June 2017.

Scientists estimate the vaquita will go extinct within a decade if its population numbers do not recover. To prevent this from happening, VaquitaCPR attempted to locate, rescue, and temporarily move remaining porpoises to a protected ocean sanctuary off the coast of San Felipe, Mexico. They were able to capture one female porpoise, which, unfortunately, died from stress after being placed in a temporary pen. The efforts to capture additional vaquita have since been cancelled. Scientists will continue to use the CPOD detectors to conduct surveys of the remaining vaquitas. Bottlenose dolphins from the U.S. Navy Marine Mammal Program may also be used to locate the porpoises. The dolphins have been trained to use echolocation to detect and identify vaquita and then signal to their handlers (by touching a plate on the side of a nearby boat) when a target has been found.