Noise Field in the Arctic 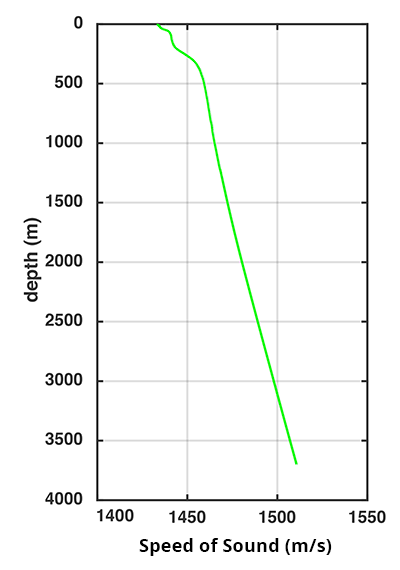 Speed of sound in the Canada Basin in the Western Arctic. The data is from the World Ocean Atlas (Boyer, et al. 2013).

The Arctic Ocean can have a wide range of ambient noise conditions, from some of the quietest to some of the loudest in the ocean. Under an ice-covered ocean with calm wind conditions, the ambient noise can be very low. When sea ice deforms or fractures due to wind, waves, or currents, it can produce loud sounds resulting in high ambient noise conditions. The ambient noise levels in the Arctic are usually well correlated with wind speed, even down to bandwidths usually dominated by shipping traffic in other ocean basins. The sea ice can generate sounds at frequencies from below 1 Hz up to 10,000 Hz, but much of the sea ice generated sound is at the lower frequencies within this range. The ambient noise also varies seasonally with sea ice shifts and melts, weather changes, and changes in animal distributions and behavior. Anthropogenic sound sources in the Arctic also tend to occur seasonally with greater activity in the summer months.

The ambient noise in the Arctic is heavily influenced by the presence of sea ice, both as a source of sound and as a factor in sound propagation. In the Arctic, sound is refracted (bent) toward the sound speed minimumat the ocean surface. Where there is sea ice, propagating sound energy will be attenuated due to scattering from the rough interface underneath the ice as well as absorption from traveling through the sea ice. In addition, multiyear ice can form pressure ridges with keels that can effectively block propagation of frequencies above 30 Hz [please see How does sea ice affect how sound travels?].

Contributions to the ambient noise in the Fram Strait in August and September include broadband ice noises, bowhead whale calls, remote seismic airgun surveys, and earthquake T-phases. The ambient noise in the Beaufort Sea is also characterized by broadband ice noises and earthquake T-waves. Closer to land, the ambient noise also includes marine mammals, with more seals in the Beaufort Sea region. In the early 21stcentury, noise from shipping traffic is conspicuously absent from the Arctic region in comparison to neighboring ocean basins. 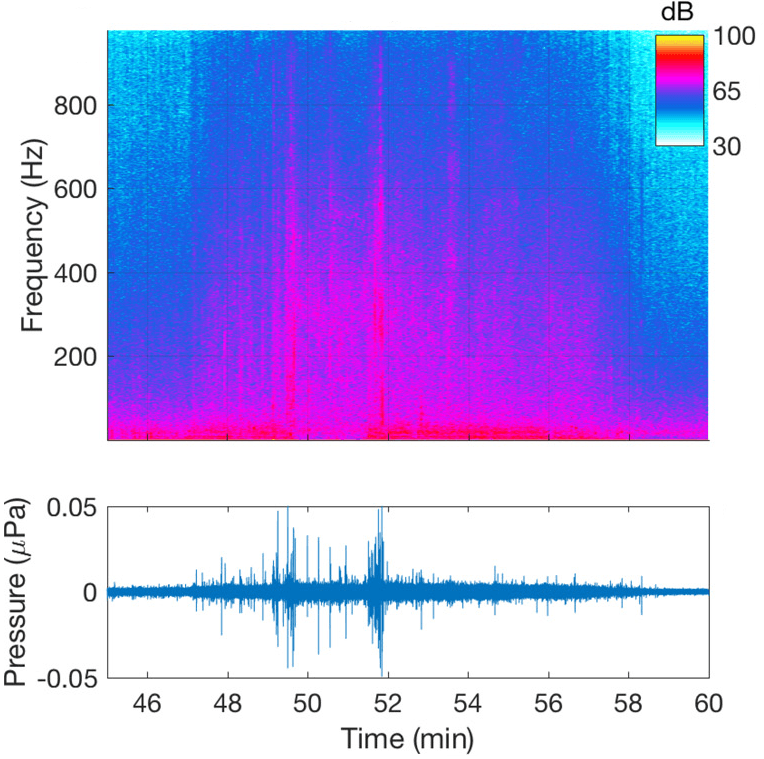 Spectrogram of broadband ice noise events lasting up to 10 minutes. dB re 1 µPa2 Hz-1. Figure modified from, Ozanich, E., Gerstoft, P., Worcester, P. F., Dzieciuch, M. A., & Thode, A. (2017). Eastern Arctic ambient noise on a drifting vertical array. The Journal of the Acoustical Society of America, 142(4), 1997–2006, with the permission of the Acoustical Society of America.

The Arctic region is warming at a faster rate than the global average, resulting in a smaller summer minimum sea ice extent, overall thinner ice, and less multiyear ice. These changes to the sea ice will likely have several impacts on the ambient noise in the Arctic. With less sea ice, low frequency sound should propagate farther. Additionally, Arctic noise levels will increase with more ice movement and increased melting. Finally, with reduced sea ice, increased human activities in the Arctic, such as shipping, are expected to increase ambient noise in the region.

This animation shows the annual change in sea ice age at each year’s minimum extent. Younger sea ice, or first-year ice, is shown in a dark shade of blue while the ice that is four years old or older is shown as white. A bar graph displayed in the lower right corner quantifies the area covered by the ice in each age category on the day of the annual minimum. In addition, memory bars shown in green portray the maximum annual value for each age range seen since January 1, 1984 on the day of the annual minimum.Animation by NASA’s Scientific Visualization Studio – svs.gsfc.nasa.gov/4489.