How do aquatic birds hear?

In-air hearing sensitivities have been measured for many species of birds. Sound provides birds with information for individual recognition, as well as foraging and predator avoidance cues.  However, diving birds often live in hard-to-study areas, and thus, data on the hearing abilities of aquatic birds, especially measurements of their underwater hearing, is lacking. Over 800 species of birds rely on the aquatic environment. Some species, like ducks, can dive to only a few meters, others, like penguins, can dive to over 500 m. Diving birds may depend on underwater sound for navigation. Some birds, such as penguins, auks, murres, and cormorants, may also use sound to locate and pursue prey.

Some aquatic birds possess auditory adaptations for hearing underwater. For example, murres and auks have a special structure that creates a barrier over the external ear opening (birds do not have external flaps, or pinna). Penguins have active muscular control of their ear opening. King penguins also have a venous structure in their middle ear that, when engorged with blood, may act as a pressure regulator for the inner ear during diving. This is similar to structures and muscles that surround its external ear and may constrict it, isolating the tympanic membrane from the surrounding waters.

Magnetic resonance imaging (MRI) scan of a common murre head (left). The three, orange arrows point to small flaps of skin that are pressed inward with water pressure, creating a barrier between the outer and middle ear and surrounding waters. In the schematic of an auk ear (right), the hatched sections also represent flaps of skin that function in a similar way. MRI image credit: MEEI Radiology and D. Ketten. Auk schematic adapted from Kartaschew and Iljitschew, 1964.

The northern gannet has extra air spaces in its head and neck, which scientists propose provide cushioning during impact while diving (these birds can hit the water surface at speeds up to 100 mph). The tympanic membrane of the gannet was found to be thicker than that of the swan, a similar sized bird. This thickening could be another protective measure for plunging and could explain higher hearing thresholds measured for the species. 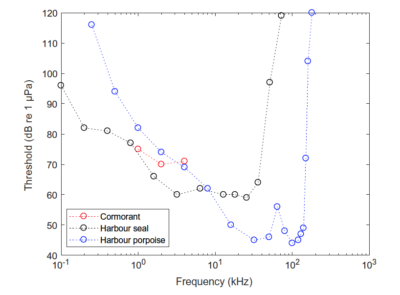 Further studies on the underwater hearing abilities of marine birds, as well as data from more than a few individuals, are needed to understand the full range of potential adaptations in aquatic bird hearing and assess sensitivities to anthropogenic noise. Aquatic birds, especially coastal populations, are potentially impacted by underwater sound sources, such as recreational boating, commercial shipping, and coastal construction (pile driving, dredging, etc.). Endangered African penguins showed a strong avoidance of their preferred foraging areas during seismic surveys within 100 km of their colony in South Africa[3]Pichegru, L., Nyengera, R., McInnes, A. M., & Pistorius, P. (2017). Avoidance of seismic survey activities by penguins. Scientific Reports, 7(1). https://doi.org/10.1038/s41598-017-16569-x..  African penguins dive to 30 m deep on average for up to 4 minutes and usually remain within 30-40 km of their colonies when breeding. African penguins raising chicks of 1-3 weeks old increased their distance between their feeding area and the location of the survey vessel when its airguns were active. Overall foraging efforts also increased significantly. Once seismic operations ceased, the penguins returned to normal foraging behavior. 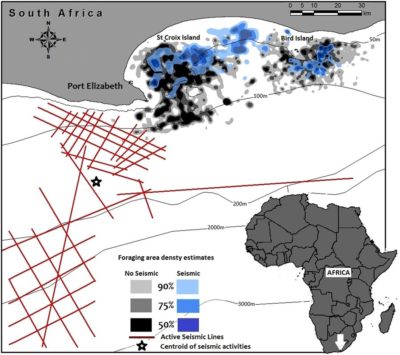 Overlay of African penguin foraging area estimates based on foraging tracks outside (2009–2013, grey shades) and during (March 2013, blue shades) seismic activities. The foraging area for the penguins shifted when airguns were operating. Concurrent seismic operations in March 2013 are shown with red lines with the center of the activities marked with a star. Image reprinted from Pichegru, L., Nyengera, R., McInnes, A. M., & Pistorius, P. (2017). Avoidance of seismic survey activities by penguins. Scientific Reports, 7(1). Under Creative Commons Attribution 4.0 International License (https://creativecommons.org/licenses/by/4.0/)