Sound waves are characterized by compression and expansion of the medium as sound energy moves through it. This represents the pressure component of sound. At the same time, there is also back and forth motion of the particles making up the medium (particle motion).

Particle motion is described by displacement, velocity, and acceleration.

The arrow over the symbol for particle velocity indicates that velocity is a vector quantity; i.e., it has both a magnitude and direction. The motion of particles in a sound wave generally align with the direction in which the wave is traveling. Pressure, on the other hand, does not have a direction associated with it.

The ratio of acoustic pressure (p) to the associated particle speed in a medium (u) is called the specific acoustic impedance (z).

For plane waves propagating in the + x direction, this ratio is: 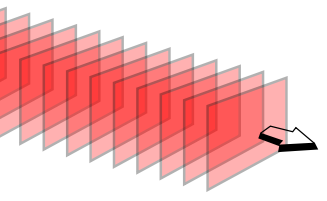 Using the previous equation, particle velocity for a plane wave can be written as a function of pressure, density, and sound speed:

) of a plane wave therefore depends not only on the pressure (p), but also on the density (ρ ) and sound speed (c ) of the medium through which the sound is traveling:

Put another way, a plane wave in air has larger particle velocity than a sound wave of equivalent pressure propagating through water, because the lower density of air makes it easier to accelerate quickly.  So even though both waves share the same pressure, the higher particle velocity in the airborne wave generates a higher intensity.

The most common device for measuring underwater sound is a hydrophone. Hydrophones measure the pressure (amplitude) of a sound wave, rather than its intensity. Hydrophones are not sensitive to particle velocity. The sound intensity level is therefore calculated from the measured sound pressure, using the relationship between the magnitude of the intensity and pressure. (For more detail, see: Introduction to Decibels)

Geophones measure particle velocity, but are more commonly used to measure seismic waves than underwater sound waves. Vector sensors measure particle velocity or acceleration together with pressure to provide direct measurements of intensity, including the direction in which the sound wave is traveling. Vector sensors are used in DIFAR (Directional Frequency Analysis and Recording) sonobuoys, for example.