Rain is one of the most important components of weather and climate. Improved understanding of the global pattern of rainfall is needed to improve weather and climate forecasting. Information on rainfall over the ocean helps meteorologists, oceanographers, and climatologists.

Rainfall is difficult to measure over the ocean. The rain gauges commonly used on land collect water in a tube and do not work at sea, where they have to be mounted on surface buoys or ships that pitch and heave in response to ocean waves. Specialized rain gauges have been developed for use at sea, but they are easily damaged or stolen when mounted on buoys on the ocean surface.

Acoustic Rain Gauges (ARGs) have been developed that can be placed safely beneath the ocean surface to record the sounds produced by rain. The unique characteristics of the sounds produced by different kinds of rainfall allow scientists to use these recordings to identify and measure raindrop size, rainfall rate, and other features of rainfall over the ocean. The sound of rain recorded by the acoustic rain gauge comes from an area of the sea surface above the instrument. This area increases as the acoustic rain gauge is placed deeper in the ocean. An average measurement of rain over an area is better than a measurement at a point because rainfall can vary dramatically over short distances. 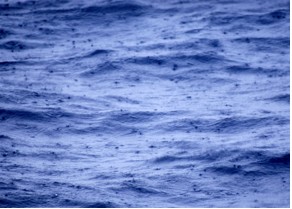 Very large raindrops splashing on the ocean surface during an experiment at Kwajalein Atoll in the central Pacific Ocean in 1998. Photo by Jeffrey A. Nystuen, Applied Physics Laboratory, University of Washington.

Rain falling on the ocean makes a loud and distinctive sound that can be used to detect and measure rain at sea. Individual raindrops make sound under water in two ways. The impact of the raindrop hitting the ocean surface makes the first sound. Following the initial impact, sound can radiate from bubbles trapped under water during the splash. For most raindrops, the sound produced by the bubbles is louder. Raindrops of different sizes produce different sounds. Small raindrops (0.8-1.2 mm) are remarkably loud because they generate bubbles with every splash. They produce sounds between 13–25 kHz. Medium raindrops (1.2-2.0 mm) do not generate bubbles and are therefore surprisingly quiet. Large (2.0-3.5 mm) and very large (>3.5 mm) raindrops trap larger bubbles, which produce sound frequencies as low as 1 kHz.

Breaking waves, which are made by wind, produce underwater sound in a similar way. (How is sound used to measure wind over the ocean?) However, when the sound levels of the underwater sounds produced by rainfall and breaking waves are plotted versus frequency, each has a distinctive shape. Drizzle has a unique peak at frequencies from 13–25 kHz, for example. Rainfall produces relatively more sound between 5–15 kHz than wind. The sound of heavy rain is very, very loud compared to the sound produced by breaking waves at all frequencies. Although an individual breaking wave is a louder sound source than a single raindrop splash, the surface of the ocean is uniformly covered by raindrop splashes, whereas breaking waves are more intermittent. 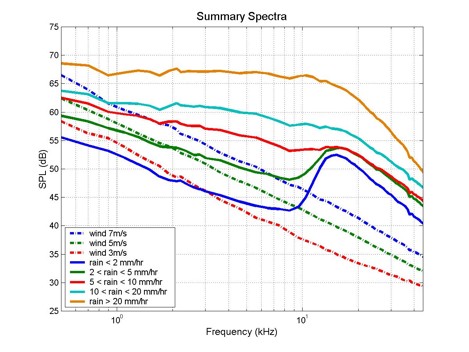 Examples of ambient noise versus frequency recorded from rain and wind. These data are from an ocean surface mooring in the eastern tropical Pacific (Ma et al. 2005). The Acoustic Rain Gauge was deployed at 20 m depth. (Figure courtesy of Jeffrey A. Nystuen, Applied Physics Laboratory, University of Washington.)