Masking occurs when noise interferes with an animal’s ability to to perceive (detect, interpret, and/or discriminate) a sound[1]Fletcher, H., & Munson, W. A. (1937). Relation between loudness and masking. The Journal of the Acoustical Society of America, 9(1), 78–78. https://doi.org/10.1121/1.1902030. Just as it can be difficult to hear someone talking at a loud party, elevated noise levels may mask important sounds for marine animals. Both natural (e.g.,snapping shrimp) and anthropogenic (e.g., shipping noise) sound sources can increase the noise in the environment.. The degree of masking is influenced by the level, frequency band, and the duration of the noise in comparison to the sound of interest. Masking has the greatest impact on animals when the noise is at frequencies similar to those of biologically important signals, such as mating calls (for more information, please see What are common underwater sounds? and How do marine mammals hear?) Some species respond to masking noise by stopping vocalizations, others by raising the intensity of their vocalizations (Lombard Effect) to be above the noise[2]Scheifele, P. M., Andrew, S., Cooper, R. A., Darre, M., Musiek, F. E., & Max, L. (2005). Indication of a Lombard vocal response in the St. Lawrence River beluga. The Journal of the Acoustical Society of America, 117(3), 1486–1492. https://doi.org/10.1121/1.1835508
, and still others by changing the frequency of their vocalization. 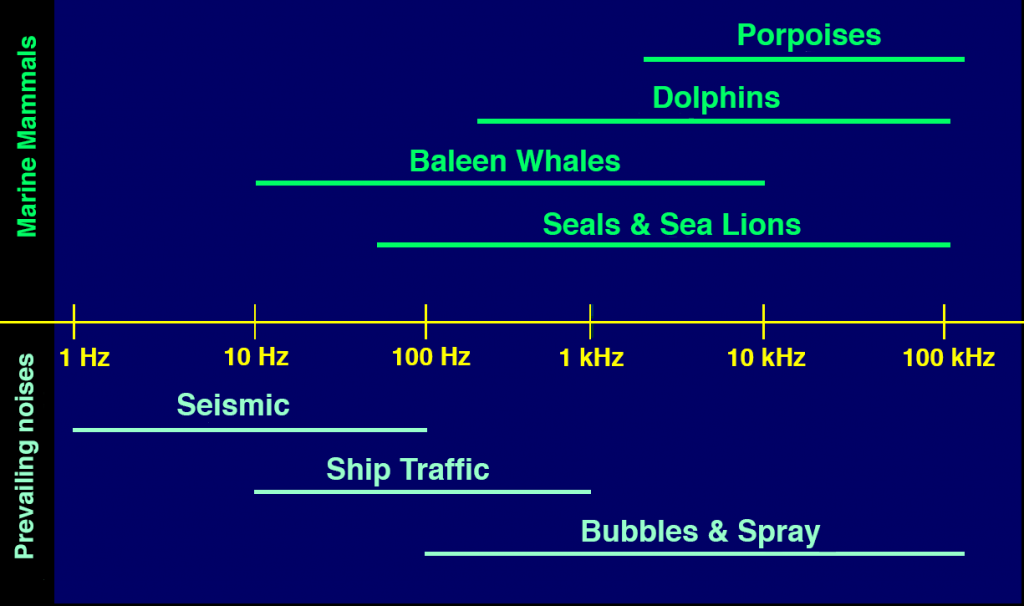 Vocalization measurements in the field have shown also that animals change their behavior in response to increased background noise, just as you may speak more loudly to be heard in a noisy environment. Other behavioral changes may include increasing the number or length of calls or shifting the frequency of the calls. Blue whales were shown to call more often when a seismic device (sparker) was operating[7]Di Iorio, L., & Clark, C. W. (2010). Exposure to seismic survey alters blue whale acoustic communication. Biology Letters, 6(1), 51–54. https://doi.org/10.1098/rsbl.2009.0651. 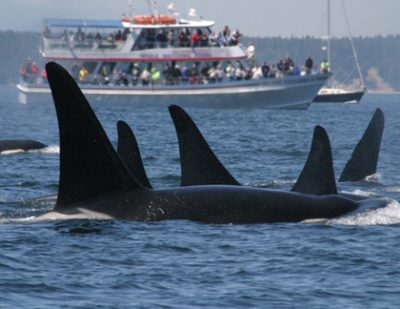 In another example, the effects of noise on the vocal behavior of beluga whales in the St. Lawrence River Estuary have been studied. This region is both a main route for commercial shipping and a popular location for whale watching. Beluga whales live in the region year-round. When exposed to noise from a small motorboat and from a ferry, belugas reduced their calling rate as the boats were approaching, but then increased the repetition of certain calls when boats came within 1 kilometer[9]Lesage, V., Barrette, C., Kingsley, M. C. S., & Sjare, B. (1999). The effect of vessel noise on the vocal behavior of belugas in the St. Lawrence River Estuary, Canada. Marine Mammal Science, 15(1), 65–84. https://doi.org/10.1111/j.1748-7692.1999.tb00782.x. Beluga whales also changed the type of vocalizations and shifted to higher frequencies, perhaps in an attempt to minimize masking. Another study showed that beluga whales vocalized more loudly when exposed to higher noise levels, a reaction called the Lombard Effect[10]Fletcher, H., & Munson, W. A. (1937). Relation between loudness and masking. The Journal of the Acoustical Society of America, 9(1), 78–78. https://doi.org/10.1121/1.1902030. There is a limit to the Lombard response when the noise completely overwhelms the animal’s vocalizations. More research is needed to determine the noise levels at which the Lombard response begins and when the beluga vocalizations are completely masked[11]Scheifele, P. M., Andrew, S., Cooper, R. A., Darre, M., Musiek, F. E., & Max, L. (2005). Indication of a Lombard vocal response in the St. Lawrence River beluga. The Journal of the Acoustical Society of America, 117(3), 1486–1492. https://doi.org/10.1121/1.1835508.

There are still many uncertainties regarding how masking affects marine mammals[14]National Research Council (U.S.) (Ed.). (2003). Ocean noise and marine mammals. Washington, D.C: National Academies Press.. For example, the potential impacts that masking may have on individual survival or the energetic costs of changing behavior to reduce masking are poorly understood.

A relatively recent concept is underwater communication space, which refers to the area over which one individual can detect the signal of another. One paper has suggested a pure signal processing approach that compares signal-to-noise (SNR) ratios of whale vocalizations to background noise[15]Clark, C., Ellison, W., Southall, B., Hatch, L., Van Parijs, S., Frankel, A., & Ponirakis, D. (2009). Acoustic masking in marine ecosystems: intuitions, analysis, and implication. Marine Ecology Progress Series, 395, 201–222. https://doi.org/10.3354/meps08402. Their algorithm has three factors: (1) spatial – the area over which ambient noise could mask a communication sound; (2) spectral – the frequency band of the communication sounds produced by the species of interest; and (3) temporal – the time duration over which background noise could compete with vocalizations. Using recordings from merchant vessels on Stellwagen Bank National Marine Sanctuary, off the U.S. east coast, in 2007, their analysis showed that ship noise from one vessel had the potential to reduce the area over which fin whale, humpback whale, and North Atlantic right whale vocalizations could be detected by 20%, 8%, and 77%, respectively. This approach is theoretical and does not consider threshold or attention mechanisms that influence actual animal response.

Because of the widespread nature of anthropogenic activities, masking may be one of the most extensive and significant effects on the acoustic communication of marine organisms today.

The content on DOSITS is based on well understood scientific principles, peer-reviewed literature, and high quality sources of scientific data. Independent experts who specialize in underwater acoustics have reviewed the material in this section.