Iceberg calving is a natural process, occurring when a rift opens in the edge of a glacier, caused by wind or water erosion, melting ice, or other events, resulting in an iceberg breaking away and falling into the ocean. The rate at which icebergs calve from glaciers increases with increased air and water temperatures. Polar regions are warming at a faster rate than the global average, and calving rates are anticipated to accelerate with this increase in temperature. Therefore, understanding and monitoring the rate of glacial ice melt and calving is critical to predicting global sea level rise as well as estimating freshwater inputs to global ocean circulation patterns.

Direct measurements of melt rates, especially at tidewater glaciers, are challenging to obtain. Glaciers often exist in remote, inaccessible locations. Their surfaces are unstable and fractured. At the edge of tidewater glaciers, calving events produce falling ice followed by a wave of seawater, both of which can be dangerous and make it unsafe for boat-based observations. Although satellite and other remote sensing techniques can be used to estimate large-scale ice loss, fine-scale measurements of melting and calving rates at a glacier’s edge remain difficult.

Underwater sound levels are loudest closest to the calving edge of a glacier. Near-source measurements of underwater sound produced by a major calving event at a tidewater glacier in northwest Greenland were reported in a recent publication (Podolskiy et al. 2022). During this “first-of-its kind ocean-bottom lander experiment”, an ocean-bottom seismometer (OBS), equipped with a hydrophone, was deployed 640 m from the center of the calving front of Bowdoin Glacier, at a water depth of 243 m. The calving event on July 29, 2019, where an iceberg approximately 1050 m by 110 m in size broke from the glacial front, resulted an “underwater-detonation-like signal”. A received sound pressure level of 182 dB peak-peak was recorded from which the extreme source level of at least 215 dB peak-peak was estimated. Recorded received median power spectral density levels were very high, exceeding 120 dB and reaching 140 dB (re 1 µPa2 Hz-1) at frequencies below 200 Hz. A glacial earthquake generated by the event was also detected by regional seismic stations up to 500 km away. 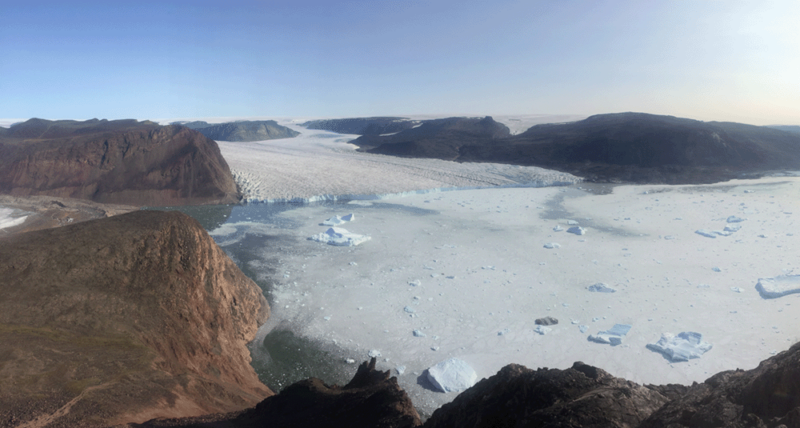 Panorama of the calving front of Bowdoin Glacier, NW Greenland, after the calving event on 29 July 2019. The Ocean-Bottom-Seismometer system used to record the sound is sitting under the ice melange on the bottom of the fjord. Photo Credit: E. A. Podolskiy.

Calving event taking palace at Bowdoin Glacier ~640 m from the hydrophone sitting on the bottom of the fjord. The iceberg detaches from the glacier, capsizes, and hits the underwater ice cliff. This event produced a glacial earthquake seismically detectable >500 km away. This recording is a selected sample from the whole event. Sound curtesy Evgeny Podolskiy, Arctic Research Center, Hokkaido University – doi: 10.1121/10.0009166.

Approximately 10 minute after the calving event at Bowdoin Glacier described in the sound caption above, the newly formed iceberg, after floating slightly away from the glacier, disintegrated (falls apart) right above the bottom lander with the hydrophone. This recording is a selected sample from the whole event. Sound curtesy Evgeny Podolskiy, Arctic Research Center, Hokkaido University – doi: 10.1121/10.0009166.

These source levels are among the highest estimated in the Arctic. Anthropogenic source level estimates are approximately 216 dB peak-peak for pile driving, 211-258 dB peak-peak for seismic airgun arrays, and 268 dB peak-peak for underwater blasting[2]Podolskiy, E. A., Murai, Y., Kanna, N., & Sugiyama, S. (2022). Glacial earthquake-generating iceberg calving in a narwhal summering ground: The loudest underwater sound in the Arctic? The Journal of the Acoustical Society of America, 151(1), 6–16. https://doi.org/10.1121/10.0009166.. When compared to other natural sound sources, such as undersea earthquakes and lightning strikes, glacier calving is considered one of the most powerful natural sound sources in the ocean.