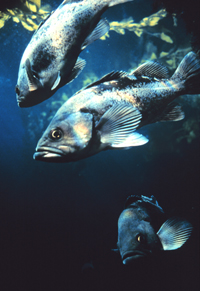 Fishes use sound to find prey, avoid predators, and find and communicate with mates (see How do fish communicate using sound? and How do fish use or make sounds when feeding?). Studies that investigate the effects of sound on fishes have been limited. Most fish experiments have been conducted in the laboratory where conditions can be controlled and fishes can be observed. However, results obtained in a laboratory do not reflect natural responses in the wild[1]Popper, A. N., Hawkins, A. D., Fay, R. R., Mann, D., Bartol, S., Carlson, T., … Tavolga, W. N. (2014). Sound exposure guidelines for fishes and sea turtles: ASA S3/SC1.4 TR-2014 ; a technical report prepared by ANSI-accredited Standards Committee S3/SC1 and registered with ANSI. Cham, Switzerland: Springer.[2]Hawkins, A. D., Pembroke, A. E., & Popper, A. N. (2015). Information gaps in understanding the effects of noise on fishes and invertebrates. Reviews in Fish Biology and Fisheries, 25(1), 39–64. https://doi.org/10.1007/s11160-014-9369-3 and some fishes are too large or difficult to keep in captivity. In the wild, fishes are known to behave differently depending on location, water temperature, physiological state, motivational state, age, body size, and school size[3]Slabbekoorn, H., Bouton, N., van Opzeeland, I., Coers, A., ten Cate, C., & Popper, A. N. (2010). A noisy spring: The impact of globally rising underwater sound levels on fish. Trends in Ecology & Evolution, 25(7), 419–427. https://doi.org/10.1016/j.tree.2010.04.005. Different fish species will also react differently to sound. Conclusions about the behavioral effects of sound on fishes, in general, should be made with caution.

Behavioral responses by fishes to sounds might range from their exhibiting a momentary awareness of the sound, to small movements, or escape responses. Depending on the degree of the behavioral response, there may not be a significant impact. An example of a significant impact to a population would be if sound causes fish to move away from foraging or breeding grounds, cease reproductive activities, or change their migratory behavior[4]Hawkins, A. D., Roberts, L., & Cheesman, S. (2014). Responses of free-living coastal pelagic fish to impulsive sounds. The Journal of the Acoustical Society of America, 135(5), 3101–3116. https://doi.org/10.1121/1.4870697.

Several studies have demonstrated an effect on fish behavior from sounds produced by airguns used for seismic exploration. In two studies, catch rates of commercially important species including cod, haddock, blue whiting, and Norwegian herring, declined in areas where airguns were used[5]Slotte, A., Hansen, K., Dalen, J., & Ona, E. (2004). Acoustic mapping of pelagic fish distribution and abundance in relation to a seismic shooting area off the Norwegian west coast. Fisheries Research, 67(2), 143–150. https://doi.org/10.1016/j.fishres.2003.09.046[6]Engås, A., Løkkeborg, S., Ona, E., & Soldal, A. V. (1996). Effects of seismic shooting on local abundance and catch rates of cod (Gadus morhua) and haddock (Melanogrammus aeglefinus). Canadian Journal of Fisheries and Aquatic Sciences, 53(10), 2238–2249. https://doi.org/10.1139/f96-177. These studies also showed that catch rates of these species increased 30-50 km away from the sound source, suggesting that fishes avoided the areas where the airguns were operating. However, other similar studies showed the opposite response, with larger numbers of fish being caught in gill nets in an area where airguns were being used, perhaps because of increased activity levels[7]Løkkeborg, S., Ona, E., Vold, A., & Salthaug, A. (2012). Effects of Sounds From Seismic Air Guns on Fish Behavior and Catch Rates. In A. N. Popper & A. Hawkins (Eds.), The Effects of Noise on Aquatic Life (Vol. 730, pp. 415–419). New York, NY: Springer New York. https://doi.org/10.1007/978-1-4419-7311-5_95. In another study, rockfishes began to exhibit behavioral changes at 161 underwater dB. When the sound level was 180 underwater dB, blue rockfishswam in tight circles and schools of black rockfish moved to the seafloor[8]Pearson, W. H., Skalski, J. R., & Malme, C. I. (1992). Effects of sounds from a geophysical survey device on behavior of captive rockfish ( Sebastes spp.). Canadian Journal of Fisheries and Aquatic Sciences, 49(7), 1343–1356. https://doi.org/10.1139/f92-150.

Some studies have found no biologically significant effect of airgun sounds on fish behavior. In one study[9]Boeger, W. A., Pie, M. R., Ostrensky, A., & Cardoso, M. F. (2006). The effect of exposure to seismic prospecting on coral reef fishes. Brazilian Journal of Oceanography, 54(4), 235–239. https://doi.org/10.1590/S1679-87592006000300007, coral reef fishes contained in field enclosures temporarily increased swimming speed and changed swimming direction when exposed to an airgun (peak source level of 196 underwater dB at 1 m) at distances of 0 to 7 m. However, the fish returned to normal swimming activities shortly thereafter. Repeated exposure to airgun sounds appeared to result in a lessening of these responses, suggesting potential habituation to the disturbance. In another study, free-swimming marine fishes on an inshore, rocky reef, including pollack and juvenile saithe, also showed no significant behavioral response to sounds produced by an airgun. Fishes remained in position on the reef and their diurnal gatherings on the reef were not affected by sound exposure. At 16 m from the source, the fish received peak sound levels of 210 underwater dB, and at 109 m from the source, they received 195 underwater dB[10]Wardle, C. ., Carter, T. ., Urquhart, G. ., Johnstone, A. D. ., Ziolkowski, A. ., Hampson, G., & Mackie, D. (2001). Effects of seismic air guns on marine fish. Continental Shelf Research, 21(8–10), 1005–1027. https://doi.org/10.1016/S0278-4343(00)00122-9. Although fishes displayed an initial startle response (a sudden bending of the body, which is a characteristic escape response), there was no movement away from the sound source. Only when the airgun was moved within 5 m of the fish (received level of 218 underwater dB) and the explosion of the airgun was visible to the fish, did the fish react by moving away. 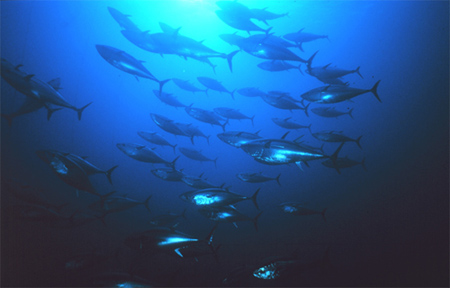 A school of bluefin tuna (Thunnus thynnus). Boating noise was shown to impact schooling structure in this fish species, a behavior that is important during migration and foraging. Image credit: NOAA.

Wild, pelagic fishes can show strong behavioral reactions to impulsive sounds like that of a pile driver or seismic airgun[13]Hawkins, A. D., Roberts, L., & Cheesman, S. (2014). Responses of free-living coastal pelagic fish to impulsive sounds. The Journal of the Acoustical Society of America, 135(5), 3101–3116. https://doi.org/10.1121/1.4870697. Two species of fish, the sprat(related to herring) and Atlantic mackerel (related to tuna) at a quiet, coastal location were exposed to short sequences of repeated impulsive sounds, simulating the strikes from an impact pile driver. Behavioral responses included both the break up of fish schools and changes in the depth of the schools. The incidence of responses increased with increasing sound level, with sprat schools being more likely to disperse and mackerel schools more likely to change depth. The sound pressure levels to which the fish schools responded on 50% of presentations were 163.2 and 163.3 dB peak-to-peak for sprat and Atlantic mackerel respectively. These fishes responded strongly to sounds during daytime when they were aggregated into schools, but they did not respond at night, when the schools had already broken up and the individual fish were dispersed. 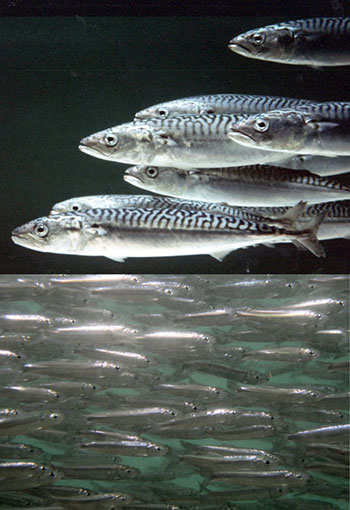 Atlantic mackerel (top) and sprats (bottom). Reprinted with permission from Hawkins AD, Popper AN (2014) Assessing the impacts of underwater sounds on fishes and other forms of marine life. Acoustics Today 10(2):30–41. 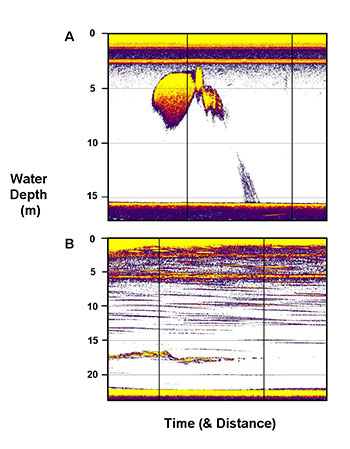 Responses of a sprat school (A, at 5 m depth) and a mackerel school (B, at 17 m depth) to sound playback, observed on an echo sounder. The sound was a 20 s sequence of 10 low frequency impulses, simulating the sound propagated several kilometres away from a pile driver or seismic air gun, occurring between the two vertical lines. After a short latency the sprat school breaks up and the fish disperse down to the seabed. The mackerel school changes depth before dispersing laterally.Reprinted with permission from Hawkins AD, Popper AN (2014) Assessing the impacts of underwater sounds on fishes and other forms of marine life. Acoustics Today 10(2):30–41.

The temporal characteristics of sounds may be as important as the actual sound levels in determining whether fish respond to them. Intermittent sounds from pile driving or seismic airguns may have a stronger behavioral impact than continuous sounds from vessels, even though the latter may have higher total accumulated energy levels. Small groups of European sea bass were exposed in an outdoor basin to a series of sound treatments, which were either continuous or intermittent, with consistent or fluctuating amplitudes[14]Neo, Y. Y., Seitz, J., Kastelein, R. A., Winter, H. V., ten Cate, C., & Slabbekoorn, H. (2014). Temporal structure of sound affects behavioural recovery from noise impact in European seabass. Biological Conservation, 178, 65–73. https://doi.org/10.1016/j.biocon.2014.07.012. The behavioral changes observed included startle responses, increased swimming speed, increased group cohesion, and diving to the bottom. However, intermittent exposure resulted in significantly slower behavioral recovery to pre-exposure levels compared to continuous exposure.

Though there have been few studies on the effects of anthropogenic sound on fish behavior, one thing that is very clear is that how fishes react to the sounds depends on a wide range of factors. These may include the normal behavior of the fish species and how it reacts to frightening signals as well as the loudness and frequency of the sound, the age and sex of the fish, and even whether it is day or night. Moreover, a fish that is feeding or protecting its nest may be focusing on its current activities and pay less attention to a sound than a fish that is swimming around or part of a school.