Wind blowing over the ocean generates waves. When these waves become large enough, they break, producing sound under water. Most of the sound of breaking waves is radiated from bubbles trapped under water at the wave’s leading edge. Sound from breaking waves contributes to the background noise in the ocean (see What are common underwater sounds).

Hurricanes (or typhoons) are large storms that form over tropical waters. Hurricanes have wind speeds of 74 mph (119 km/h) to 180+ mph (289+ km/h). Waves can be very large in a hurricane, generating a loud sound underwater that can be heard in the local region. The sounds generated by a hurricane have rarely been recorded by a hydrophone.

Hurricane Irma was a powerful category 5 hurricane that made several landfalls in the Caribbean and Florida in September 2017, causing catastrophic damage in many areas. Hurricane Irma made landfall at Marco Island, FL and then Naples, FL on September 10, 2017 as a category 3 storm with 115 mph (185 km/h) winds. Irma then travelled up the Florida peninsula, passing inland of Sarasota, FL. Hurricane Irma brought peak winds of around 75 mph to the Sarasota area where a hydrophone near shore recorded underwater sounds made by the hurricane winds. The hurricane related underwater sound levels increased 30dB at the peak of the onshore winds in the Sarasota, FL area.

Sound levels recorded by a hydrophone at New Pass, FL (near Sarasota) during the passage of hurricane Irma in September 2017. Image curtesy David Mann, Loggerhead Instruments.

Hurricane Gert was a 1999 storm that did not make landfall but caused damage in Bermuda from high winds. Hurricane Gert passed almost right over a NOAA hydrophone deployed at a depth of 800m that was monitoring the Mid-Ocean Ridge for earthquakes. 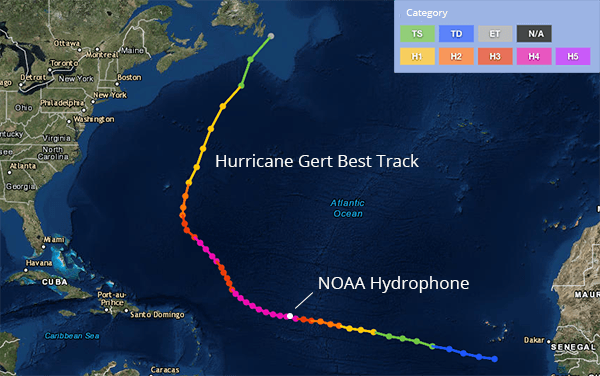 Track of Hurricane Gert in 1999. NOAA hydrophone location is indicated by the white dot. Gert was a Category 4 hurricane as it passed the NOAA hydrophone. Image from NOAA.

Gert was a strengthening category 4 hurricane with winds of 126-150 mph (202km/h to 241km/h) as it passed the hydrophone on September 15th. The recording from that hydrophone illustrates that even at very high winds speeds there is a positive relationship between wind speed and the underwater sound levels generated by a hurricane. The sound pattern is similar to a cross section of the wind in a hurricane. 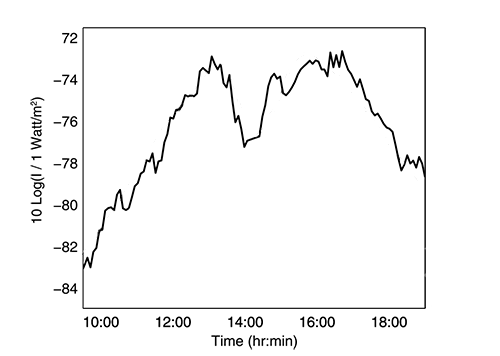 Underwater acoustic intensity level L = 10 log(I/ Watt/m2), in the 10 to 50 Hz band, received by the NOAA hydrophone on 15 September, with 5 minute averaging. The maxima at 13:30 and 15:30 GMT correspond to the powerful winds of the hurricane’s eye-wall, and the minimum at 14:30 GMT corresponds to the hurricane’s eye. The sound pattern is similar to a cross section of the wind in a hurricane. Modified from Figure 1 in Wilson, J. D., & Makris, N. C. (2008). Quantifying hurricane destructive power, wind speed, and air-sea material exchange with natural undersea sound. Geophysical Research Letters, 35(10).