What components of sound are used for hearing?

There are a wide variety of ear structures in terrestrial and aquatic vertebrates and invertebrates. Ears in marine invertebrates and fishes evolved prior to ears in land animals whereas ears of marine mammals evolved from those of land mammals that returned to water and therefore readapted to hearing in water. Scientists investigate how ears of each aquatic group work and how they may differ from land based counterparts.

Sound waves compress and expand the medium as they propagate through it. This represents the pressure component of sound. The particles of the medium vibrate back and forth along the direction of propagation (particle motion).

The energy transmitted by a sound wave is comprised of both pressure (potential energy due to the acoustic impedance) and particle velocity (kinetic energy due to the movement of the particles) components. Acoustic intensity is defined as the amount of energy transmitted through a unit area per unit of time in the direction in which the sound wave is traveling; it is a measure of acoustic power. Acoustic intensity is the product of the pressure and particle velocity of the sound wave:

The sound is influenced by the medium through which it moves. The ratio of acoustic pressure (p) to the associated particle speed in a medium (u) is called the specific acoustic impedance (z). This quantity is similar in concept to the idea of electrical resistance.

Most fish and invertebrate tissues have a density that is approximately the same as water and move with the impinging sound wave. Thus, they do not detect sound pressure. Most bony fishes have solid calcified masses called otoliths (literally, “ear stones”). More primitive fish species (such as sturgeon and paddlefish) and elasmobranchs (sharks and rays) have multiple, separate crystals, called otoconia, held together by gelatinous material. The otoliths or otoconia contact the stereociliary bundles of the hair cells. Because the density of otoliths and otoconia is higher than water, they move with a different amplitude and phase than the rest of the fish’s tissues, causing the stereociliary bundles of the hair cells to bend. This results in a neural signal being sent to the brain to convey the detected particle motion component of sound.

Fish hearing short: Otoliths. Video describing fish otoliths and how they work. Video by Discovery of Sound in the Sea.

Most marine crustaceans (e.g., lobster, crabs, and shrimp) also have an extensive array of sensory hairs covering their bodies. Water- or substrate-borne vibrations associated with changes in acceleration, hydrodynamic flow, and/or sound, may stimulate these sensory hairs.

Some bony fishes are also able to detect the pressure component of sound using a gas-filled structure, the swim bladder, located in the abdominal cavity. Because gas is much more compressible than water, the swim bladder will expand and contract with the pressure changes that occur within a sound field. This pulsation reradiates the received sound pressure. This reradiated signal travels through fish tissues to the ear and may stimulate the ear. How well the signal from the swim bladder is detected at the ear depends on how much the signal is attenuated between the swim bladder and the ear. If the fish has adaptions to the swim bladder that bring it closer to the ear, then the signal is not attenuated very much. In these cases, the fish is able to detect sound pressure as well as particle motion [4]Schulz-Mirbach, T., Ladich, F., Mittone, A., Olbinado, M., Bravin, A., Maiditsch, I. P., Melzer, R. R., Krysl, P., & Heß, M. (2020). Auditory chain reaction: Effects of sound pressure and particle motion on auditory structures in fishes. PLOS ONE, 15(3), e0230578. https://doi.org/10.1371/journal.pone.0230578.[5]Popper, A. N., & Hawkins, A. D. (2018). The importance of particle motion to fishes and invertebrates. The Journal of the Acoustical Society of America, 143(1), 470–488. https://doi.org/10.1121/1.5021594.. 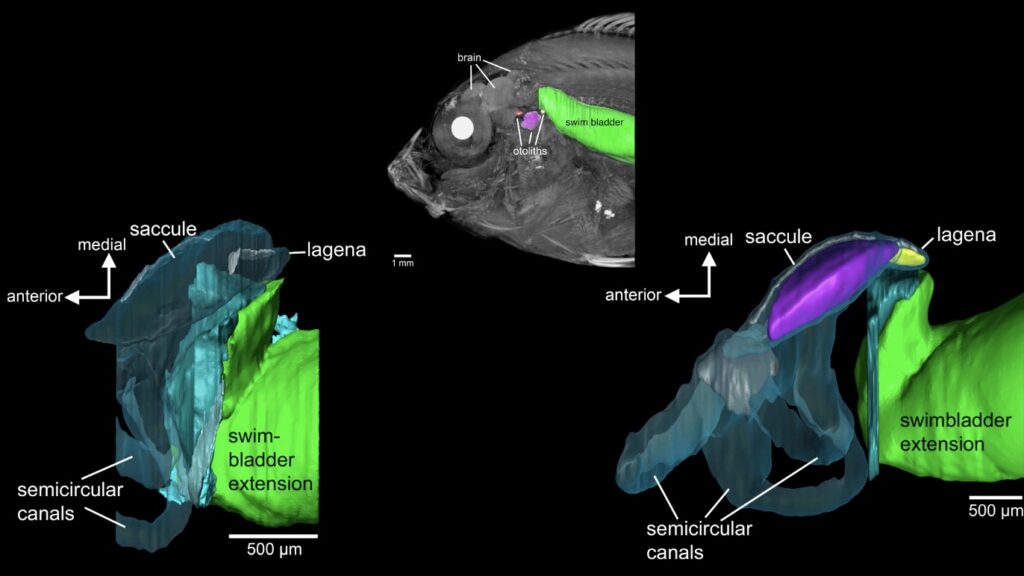 One group of species, the otophysans (which include carps, minnows, catfishes, and characins) have a unique mechanical coupling, the Weberian ossicles, connecting the swim bladder and inner ear. The Weberian ossicles are a series of modified bones of the vertebral column (the first few vertebrae of the backbone). They are thought to move in response to sound stimuli that cause movements of the wall of the swim bladder and carry the signal to the inner ear, thereby directly causing movement of the otoliths, and stimulating hearing [6]Schulz-Mirbach, T., Ladich, F., Mittone, A., Olbinado, M., Bravin, A., Maiditsch, I. P., Melzer, R. R., Krysl, P., & Heß, M. (2020). Auditory chain reaction: Effects of sound pressure and particle motion on auditory structures in fishes. PLOS ONE, 15(3), e0230578. https://doi.org/10.1371/journal.pone.0230578.. As a result of having the Weberian ossicles, most otophysans hear less intense sounds and can hear to higher frequencies than most other fish species[7] Popper, A. N., and A.D. Hawkins. (2021). “Hearing,” in The Physiology of Fishes, edited by S. Currie, and D. H. Evans (CRC Press, Boca Raton, FL). Indeed, goldfish hear up to 3 kHz with best hearing from 500-800Hz.

The most common device for measuring underwater sound is a hydrophone. Hydrophones measure the pressure (amplitude) of a sound wave, rather than its intensity. Hydrophones are not sensitive to particle velocity. They estimate sound intensity level from the measured sound pressure by assuming that the acoustic field can be modeled as a propagating plane wave. In this case, particle velocity is assumed to be proportional to and in phase with acoustic pressure. (For more detail, see: Introduction to Decibels)

Geophones measure particle velocity, but are more commonly used to measure seismic waves than underwater sound waves. Vector sensors measure particle velocity or acceleration together with pressure to provide direct measurements of intensity, including the direction in which the sound wave is traveling. Vector sensors are used in DIFAR (Directional Frequency Analysis and Recording) sonobuoys, for example.