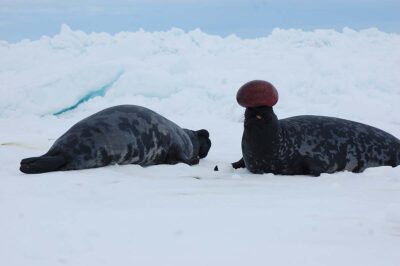 Two male hooded seals, one with its septum inflated (“red balloon”). The inflatable nasal cavity of the male hooded seal nearly doubles the size of its head. When deflated, it hangs down in front of the animal’s mouth. The hood is used in visual displays towards females and other males, and can also be used in sound production. Males produce single and pulsed sounds through the use of their hood and septum. Photo credit: Heloise Frouin-Mouy, JASCO Applied Sciences. Authorisation number IML-2018-01 (Officer I/C – Mike Hammill, DFO).

Hooded seals (Cystophora cristata) are cold water pinnipeds that live primarily on drifting pack ice and in deeper waters of the Arctic and North Atlantic Oceans. Highly unsocial, aggressive, and more territorial than other species, hooded seals spend most of the year dispersed and offshore. During mating and molting seasons, the seals aggregate in loose herds on the pack ice. Females give birth to a single pup through March and April, with mating season running from April through June. Remarkably, female hooded seals only nurse their pups for 4 days (the shortest lactation period for any mammal).

Both male and female adult hooded seals are large, and their silvery-white bodies are covered with numerous, irregularly-shaped blotches. Adult males, however, have a few features that distinguish them from females (sexual dimorphism). Adult males have the ability to inflate parts of their nasal cavity. One part is a stretchy membrane that can be inflated into a black, bi-lobed hood that nearly doubles the size of a male’s head. When deflated, it hangs down in front of the mouth. They also have an elastic nasal septum that can be extruded and inflated. When inflated, it resembles a bright red balloon, and adult males will use this “balloon” in visual displays to attract females during mating season and to ward off other males. Males actively compete with each other for access to females with rival males fighting among themselves.

Data on hooded seal underwater calls are limited. Most in air and underwater sounds are produced during the species’ short breeding season, and it is difficult to access the animals at this time. It is not known if both male and female hooded seals produce underwater sound. However, as the female primarily remains on the pack ice to nurse her pup, and males are mainly in the water, it is assumed most underwater calls are produced by male seals. Underwater sounds are typically broadband and pulsed, and have been described as clicks, trills, knocks, whoops, growls, and moans. In one passive acoustics study in the Gulf of St. Lawrence, Canada, 22 underwater, voiced calls were identified (Frouin-Mouy and Hammill 2021). The “A1iibII” repetitive whooping sound (centered around 920 Hz), and “CVIII” paired pulsed signal (centered around 630 Hz) were the most common underwater calls recorded. Male hooded seals also produce single and pulsed sounds, in air and underwater, through the use of their hood and septum. In the Gulf of St. Lawrence, of the 22 underwater sounds identified, three were associated with the inflation/deflation of the proboscis/septum, and two other calls ( “ping” and “ouwah” sounds) were produced in sequence, underwater, with inflation and deflation sounds.