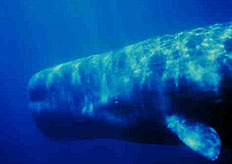 Sperm whales are the largest of the toothed whales (odontocetes). Adult females reach about 11 m (36 ft) in length and weigh 15 tons. Male sperm whales are generally much larger, measuring up to 18 m (60 ft) and weighing up to 60 tons. Sperm whales have very distinctive physical features. They are grayish-brown in color and have a small dorsal fin. They have 20-26 large, conical teeth in each side of the lower jaw. The teeth in the upper jaw usually do not erupt; however the upper jaw has indentations into which the lower teeth fit. The most noticeable feature of a sperm whale is its extremely large, blunt head that is about one third of its entire body length. The head contains a massive spermaceti organ. The spermaceti organ consists of a case filled with oil that has a different chemistry than the melon in other toothed whales. The spermaceti organ is thought to focus sounds produced in the nasal passages and sacs of the sperm whale (see How do marine mammals produce sounds?). Sperm whales are also the only living cetaceans whose single blowhole is asymmetrically located on the left side of the head. 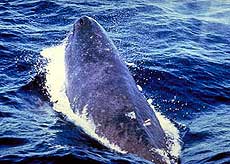 Sperm whale vocalizations include directional clicks, from less than 100 Hz to 30 kHz. The majority of energy in these clicks is in the 5 to 25 kHz range. In addition to echolocation, in social situations, sperm whales produce repeated patterns of clicks called codas (see How do marine mammals communicate using sound? Individual-specific vocalizations), which are used to attract females, compete for mates, display aggression, and maintain group cohesion. While foraging, sperm whales generally make regularly spaced clicks interrupted by “creaks”, and very rapid clicking associated with short range sonar and the last stages of prey capture.

Sperm whales are deep divers, descending as deep as 1,000 meters and holding their breath for up to 90 minutes. It is generally believed that their primary prey on these deep dives are squid. In the Gulf of Alaska and Southern Ocean, fish appear to also comprise part of the sperm whale diet. The sperm whale is the largest marine mammal known to take, or depredate prey from commercial fishing gear. Sperm whale depredation of sablefish (“black cod”; Anoplopoma fimbria) from Gulf of Alaska longline fishing gear has been reported since at least 1978. Some fishermen have lost up to 25% of their catch to sperm whales removing hooked fish from their lines. Scientists hypothesize that the whales may be attracted to the sounds produced by a vessel’s engine as it is engaged and disengaged during gear retrieval. Recent studies have found that sperm whales primarily use echolocation while foraging on fishing gear. Scientists and managers are using passive acoustic monitoring to further understand this behavior. For more detail, see How is sound used to protect marine mammals? 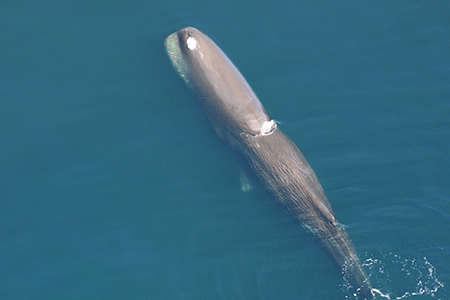