The particle motion in a sound wave is described by displacement, velocity, and acceleration. These three quantities are vectors, because each has a direction as well as a magnitude. Vector sensors measure one of these vector quantities together with pressure. (Some vector sensors actually measure pressure gradient, which is proportional to acceleration, rather than particle motion itself.) For example, a vector sensor can be created by appropriately combining two geophones, which generate electric signals proportional to the particle velocity in a sound wave, and a standard hydrophone, which measures pressure.

While hydrophones are the most common underwater acoustic sensors, vector sensors have been used in U.S. Navy DIFAR (Directional Frequency Analysis and Recording) AN/SSQ-53 sonobuoys for many years. The DIFAR sensor consists of an omnidirectional hydrophone that measures pressure and two particle motion sensors mounted at right angles to each other that measure the horizontal components of particle motion associated with the sound wave. All three sensors are co-located in a single package that has nearly the same density as seawater so that the package moves with the sound wave in the same way as the surrounding water particles. 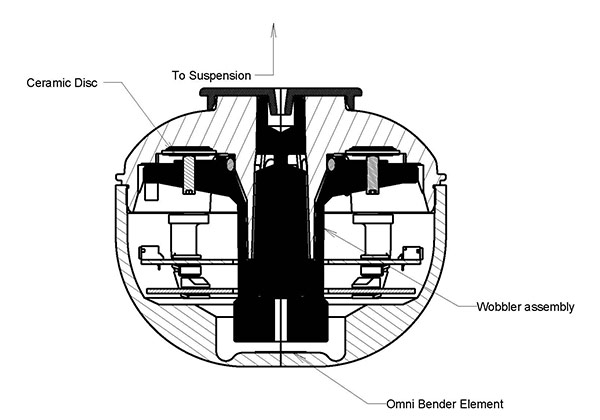 DIFAR sensors are most sensitive to signals arriving from a specified horizontal direction, while being less sensitive to signals arriving from other directions. The beam pattern, which describes the sensitivity of a directional receiving system (either an array of sensors or a single vector sensor) to incoming signals as a function of heading or direction, has the shape of a cardioid when a conventional beamforming approach (equal weighting for all components) is used with single vector sensor data. 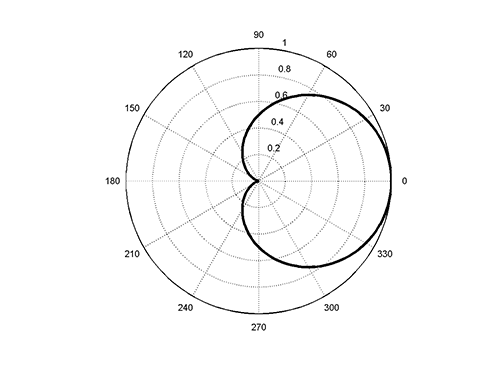 In addition to determining the direction in which a sound wave is traveling, the DIFAR sensor also improves the signal-to-noise (SNR) ratio by rejecting noise arriving from directions other than the direction from which the signal of interest is arriving.

New, single-crystal piezoelectric material has recently made it possible to construct much smaller vector sensors without losing sensitivity. For example, three-dimensional (3-D) vector sensors that use separate single crystals to measure acceleration and a hydrophone to measure pressure can now fit in a housing that is 0.8 inches in diameter and 3.125 inches in length. 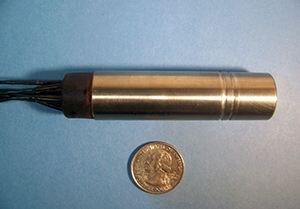 Wilcoxon VS-301 vector sensor. An example of a miniature three-dimensional (3-D) vector sensor, the device is 0.8 in in diameter and 3.125 in long. Image credit: www.wilcoxon.com.

These new 3-D vector sensors provide more flexibility than the older 2-D sensors since they can make measurements in any orientation in space. Miniaturization allows for new applications as well as deployment approaches to reduce motion-induced self-noise, a source of noise contamination that has impeded wider use of acoustic vector sensor technology.