Currents are commonly measured with sound. There are several different ways to measure currents with sound. An instrument called an Acoustic Doppler Current Profiler or ADCP is often used to measure the current in specific places like shipping channels, rivers and streams, and at buoys. They are also called Acoustic Doppler Profilers (ADP). ADCPs can be placed on the bottom of the ocean, attached to a buoy or mounted on the bottom of ships.

RAFOS floats (SOFAR spelled backwards) also use sound to measure currents. RAFOS Floats are typically used in the open ocean to measure a current like the Gulf Stream. 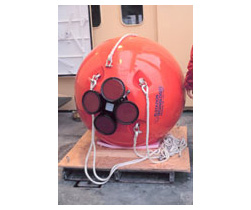 The ADCP sends out a sound that reflects off small particles and returns to the ADCP. If those particles are in a current, then those particles are moving with the current. There will be a Doppler shift in the frequency of the sound that reflects off the small particles and returns to the ADCP. That Doppler shift can be used to calculate the current speed. Most ADCPs have 3 or 4 sound sources that work together. By using several sources, the ADCP can tell the direction of the current as well as its speed. The ADCP can also tell at what depths in the water column the current is moving by how long it takes the sound to return to the ADCP.

RAFOS floats (SOFAR spelled backward) are floating instruments designed to move with the water and track the water’s movements. The float contains a hydrophone and signal processing circuits, a microprocessor and a battery. The RAFOS float has an accurate clock with which to determine the arrival times of acoustic transmissions. The RAFOS Float keeps track of its own position by listening for the signal from sound sources in the water near the study area. The RAFOS Float uses the time of travel and the phase of the sound to determine its position. Because the RAFOS Float moves with the current, the float’s position tracks the path of the current. 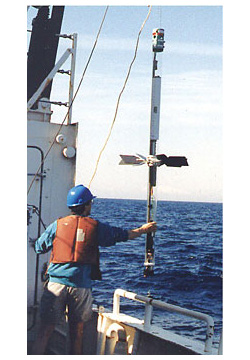 This image shows a type of RAFOS float called a COOL (COastal Ocean Lagrangian) float, with Dr. Mark Prater in the foreground. Courtesy of the RAFOS Float Group at URI.

A key element of the RAFOS float is that the instrument does not have to be retrieved for its data to be analyzed. The float is designed to return to the surface and telemeter its data to a satellite system at the end of each mission. The RAFOS float can be weighted to float at any depth.

Track of a RAFOS float crossing the North Atlantic Current (top) with corresponding temperature and pressure records (bottom). Courtesy of the RAFOS Float Group at URI.

Next: Study the sea floor