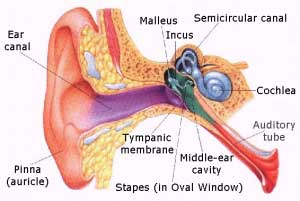 The ear is the hearing organ in humans. It consists of the outer ear (pinna and auditory meatus), the middle ear (ossicles) and the inner ear (cochlea and vestibular system). Courtesy of Andrew Wright, University of Ulster.

The human ear, which is located in the skull, is divided into three sections: (1) the outer ear collects and directs sound, (2) the middle ear filters and amplifies the acoustic energy to the inner ear, and (3) the inner ear transforms the acoustic energy to electrical signals (neural impulses) that are processed by the brain. The outer ear includes the ear flap (pinna) and outer ear canal (external auditory meatus). The pinna funnels sound into the outer ear canal. The canal ends in the eardrum, or tympanic membrane, which separates the outer and middle ear. The middle ear in land mammals is an air-filled space that contains a series of three small bones or ossicles called the incus (anvil), malleus (hammer), and stapes (stirrup). These bones connect the tympanic membrane and the oval window, which is the opening to the inner ear.

Sound pressure waves entering from the outer ear cause the tympanic membrane to vibrate. The vibrations are transferred via the ossicles to the oval window. The lever action of the ossicles amplifies the sound energy that can enter the inner ear.

The function of the inner ear is to change the sound intensity into electrical signals that the brain processes. The inner ear consists of organs for both hearing (cochlea) and balance (vestibular system).

The cochlea is a spiral-shaped chamber within the inner ear that transforms sound waves into nerve impulses. It is considered “the organ of hearing.” (Diagram from the Handbook for Acoustic Ecology, CD-ROM edition, B. Truax, ed., Cambridge Street Publishing, 1999. www.sfu.ca/~truax/csr.html)

To understand the differences in human and marine mammal hearing it is important to mention a few more items. First, detecting sound is only half the battle. Detecting sound means knowing that there is sound being produced in the environment. Localizing the sound source, or determining which direction the sound is coming from, is also important.Terrestrial mammals are able to localize sounds because our ears can tell us if sound arrives at each ear at different times or with a different loudness. For example, the ear farther away from the sound hears it later and softer. The differences in time of arrival and loudness allow humans and other mammals to localize sounds.