Gray whales are found in coastal waters of the North Pacific, with the largest population in the eastern North Pacific. These whales winter along the coast of Baja, California, both along the coast and inside several breeding lagoons. They migrate north along the Pacific coast to feeding grounds in the Bering Sea in the spring. They are opportunistic foragers, feeding on small crustaceans and worms found in bottom sediments.  They travel at 3-6 miles per hour (4.8-9.6 km/hr) and can stay submerged for up to 15 minutes.

Gray whales have a streamlined, mottled, gray body, commonly covered with barnacles. They lack a dorsal fin but have a prominent dorsal hump followed by a series of 6-12 “knuckles” that extend along the whale’s back to the flukes. Maximum length of the gray whale is 14.1 m (46 ft); females are slightly larger than the males.

The gray whale’s vocal repertoire includes rapid, rhythmic pulses and frequency- modulated signals. Eastern North Pacific gray whale calls (40 Hz- 4 kHz) have been detected throughout their range and across all seasons. Calls tend to peak during early morning and evening. The most abundant sound produced by the gray whales in their breeding lagoons is a low-frequency, pulsed “S1” (knock) call, which is produced in “bursts” or “bouts”.  Individual pulses range in frequency between 100 and 1600 Hz, grouped in sets of 3-18 pulses per call.  While migrating, gray whales primarily produce a frequency-modulated, low frequency moan, the “S3” call. Other gray whale calls have been described as rumbles, growls, chirps, clicks, croaks, belches, grunts, and bubble blasts, and are summarized in the table below. Gray whale calls can also be “mixed” and include more than one call-type. The function or behavioral context for any of these calls is unknown. 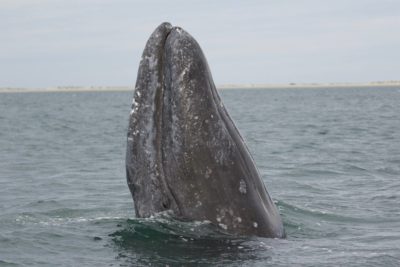 Gray whales have a streamlined, mottled, gray body, with a tapered head. They are bottom-feeding baleen whales that filter small crustaceans and worms out of seafloor sediments. Image credit: USFWS.

Because of their coastal habitat, especially along their migration route, gray whales are often in contact with human activities and are exposed to a wide range of natural and anthropogenic sounds. During playback studies of underwater noise sources, gray whales modify their calling behavior in a variety of ways as noise increased. They also changed swimming speed, foraging activity, and surface behaviors in the presence of noise.