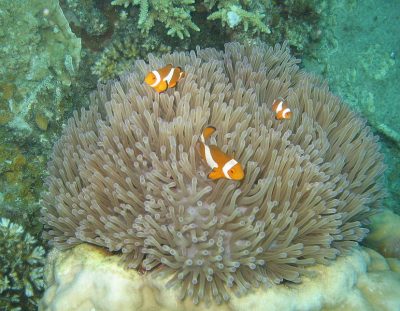 Clownfish are tropical fishes that live in small, social groups in association with sea anemones (the above shows a common clownfish, Amphiprion ocellaris, in the sea anemone, Heteractis magnifica). “Chirp” and “pop” sounds are produced during agonistic interactions between large fish and their smaller conspecifics . These interactions help maintain the size-based dominance hierarchy of the group. Imaged credit: Pulau Perhentian Besar, Malaysia used under Creative Commons Attribution-Share Alike 3.0 Unported license.

Clownfish are tropical marine fishes found in the warmer waters of the Indian and Pacific ocean basins. There are 28 species of clownfish whose body coloration varies from yellow, orange, or red/black with white vertical bars or patches. The largest clownfish species can reach 18 cm (7.1 in) while the smallest measure 10 cm (3.9 in).

Clownfish live in small colonies within a host anemone. The clownfish and anemone share a symbiotic relationship, where both animals benefit. The clownfish are grouped into breeding male/female pairs and multiple non-breeding, juvenile males. The largest and dominant is the breeding female; the next largest fish is the breeding male. If the female of a group dies, the largest male changes sex to become a breeding female.