In addition to the statistical uncertainty associated with measurement errors, biological and other natural systems have an uncertainty associated with the range of natural variability. In such cases, there is no one “true” value, and scientists use statistical tools such as the mean and standard deviation to describe the natural variability that occurs and answer questions about it.

When examining the effects of an underwater sound source on marine animals, for example, scientists might ask questions such as:

The most accurate way to answer these questions would be to measure the number of animals around the source each time it transmits or to study the reaction of every single animal when the source is transmitting. However, this approach is not realistic. It would be impossible to follow a source every time it transmits and observe the number and behavior of all animals near it. Scientists must instead draw conclusions in such situations based on a limited number of observations.

In order to understand the process for comparing two measurements in systems with natural variability given limited observations, consider the simple question:

Are 12-year-old boys in the United States taller or shorter on average than 12-year-old girls?

The distributions of the heights of boys and girls in the United States between 12 and 12.5 years of age are given in the following figure, as determined from samples of 573 boys and 576 girls. 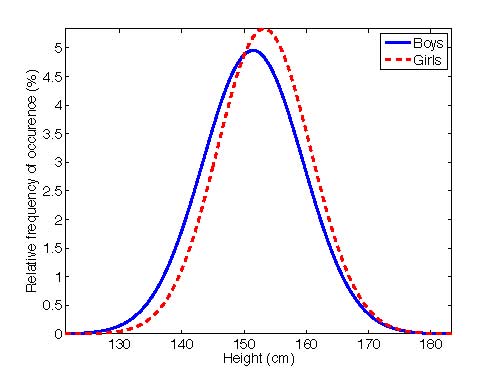 Sample distributions of the heights of boys and girls in the United States between 12 and 12.5 years of age. The plot shows the relative frequency of occurrence in percent with which the heights specified on the horizontal axis are observed.

Scientists describe these data with the same statistical tools used to help interpret measurement errors, that is, the average or mean values and the standard deviations:

In these samples, the average height of girls is slighter greater than the average height of boys. There is a great deal of overlap between the two distributions, however. Since all children are not being measured, the statistical uncertainty in the estimates of the mean heights must also be calculated in order to determine whether the mean heights are really different or whether the observed difference might simply have happened by chance.

The standard deviations of the estimates of the mean heights are:

The difference in the mean heights is 1.76 cm (153.19 – 151.43), which is much greater than the standard deviations of the means. This suggests that the difference in the average heights of 12-year-old girls and boys is real and not due to chance. Scientists have developed a statistic called the t-test that compares the sample means with the standard deviations of the means to determine whether the two samples are different (see, for example, Trochim, W. M., “Research Methods Knowledge Base”). The t-test also allows scientists to determine the statistical level of significance. It is commonly accepted that the difference is statistically significant if there is only a 1 in 20 (5%) probability that the difference could be due to chance.

Given the large overlap between the two distributions in this case, rather large sample sizes are needed to have small enough standard deviations of the means to draw statistically significant conclusions. Not all situations are like this one, however. The following figure compares this case to two hypothetical cases with the same mean values, but with medium and low variability. 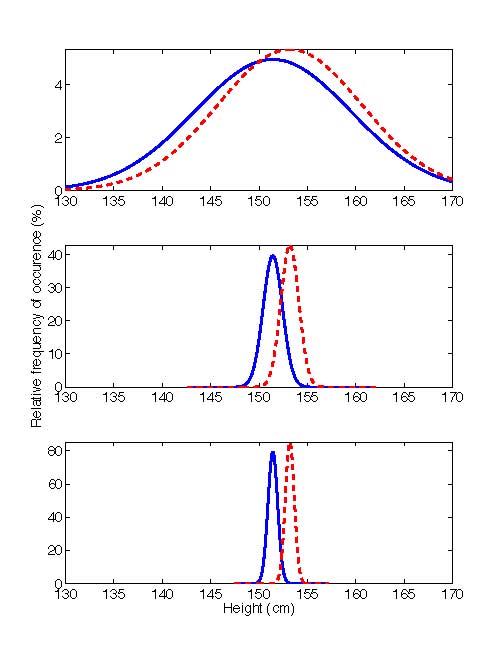