Echosounders calculate water depth by measuring the time it takes for the acoustic signal to reach the bottom and the echo to return to the ship. (Courtesy of Naval Meteorology and Oceanography Command)

The depths of the ocean have been charted since the early days of sailing using a method called sounding which used a weight on the end of a rope to estimate water depth.

The invention of sonar changed the way that the seafloor is mapped. A combined transmitter and receiver, called a transducer, sends a sound pulse straight down into the water. The pulse moves down through the water and bounces off the ocean bottom. The transducer is able to pick up the reflected sound. Computers precisely measure the time it takes for the sound pulse to reach the bottom and return. In shallow water the sound waves will return very fast and in deeper water it will take more time to receive the echoes. The depth of the ocean is calculated by knowing how fast sound travels in the water (approximately 1,500 meters per second). This method of seafloor mapping is called echosounding.

Multibeam bathymetry sonar is the relatively recent successor to echo sounding. About 30 years ago, the Navy developed a new technology that uses many beams of sound at the same time to cover a large fan-shaped area of the ocean floor rather than just the small patch of seafloor that echo sounders cover. These multibeam systems can have more than 100 transducers, arranged in precise geometrical patterns, sending out a swath of sound that covers a distance on either side of the ship that is equal to about two times the water depth. All of the signals that are sent out reach the seafloor and return at slightly different times. These signals are received and conver

ted to water depths by computers, and then automatically plotted as bathymetric maps. The data acquired by multibeam systems are much more complex than single-beam surveys; this means higher resolution is possible, but also that more involved signal processing is necessary in order to interpret the data. 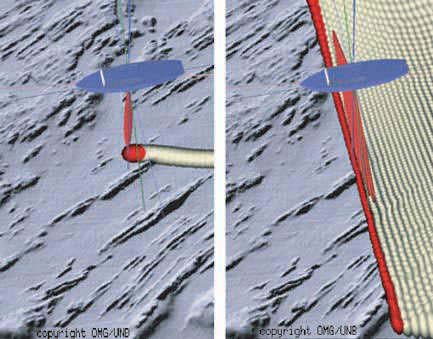 Next: Find objects
on the sea floor