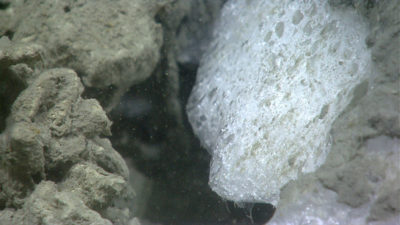 Close up imagery of methane hydrate. Scientists study methane hydrates as a potential natural gas source and for its potential role in releasing methane to the atmosphere during climate change events. Image courtesy of the NOAA Office of Ocean Exploration and Research.

Methane (CH4) is a simple hydrocarbon, and is the primary component of the natural gas that is burned for energy production. Methane is a potent greenhouse gas because although methane is at a much lower concentration in the atmosphere than CO2, per molecule it is 20 times more effective at trapping radiation than CO2.

Methane has biological and geological origins in the ocean and can be found as an icy hydrate or in the form of bubbling gas. Scientists and resource managers are interested in locating global ocean methane reservoirs and measuring methane flux. 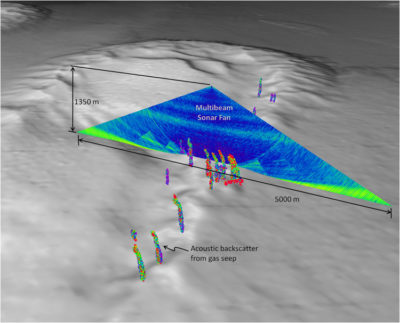 Advances in modern sonar technology have made it possible to locate and map submarine methane sources. In addition to providing data on seafloor depth, multibeam echosounder (MBES) systems can also provide acoustic backscatter data that can be used to distinguish features in the water column, including methane bubble streams. MBES advancements have allowed for the discovery of thousands of previously unknown methane seep sites in waters of the Northeast, mid-Atlantic, and Pacific Northwest United States, as well as other sites globally. Mapping these sites is important for establishing a baseline against which future observations and measurements can be compared. Geological events, such as earthquakes or submarine landslides, could result in methane being suddenly released from oceanic sediments. Increasing water temperatures could also cause methane hydrate deposits to break down and enter the water column. Since 2016, mapping efforts have resulted in the discovery of over 2,700 new bubble streams at over 1000 individual sites on the Cascadia Margin, located offshore of Washington, Oregon, and northern California, where methane is stored within a major subduction zone. In 2013, the discovery of significant methane seepage on the northern U.S. Atlantic passive margin was unexpected and may indicate numerous seeps remain to be discovered on other passive margins.

More recently, scientists are using passive and active acoustic methods to monitor and measure seafloor methane flux in real time. Methane seeps produce underwater sound as a result of bubble formation and fragmentation. The frequency range and sound levels of the seep streams are related to bubble size and changes in the volume and strength of the bubble stream. Smaller bubbles emit higher pitched sounds, while larger bubbles emit lower sounds. Scientists have successfully recorded the sounds of methane bubble streams off the Oregon coast using a hydrophone. Hydrophones are useful since they can be left on the seafloor for days or even weeks to monitor methane seep activity, which can be sporadic. The acoustic signature of the Heceta Bank seep site off the coast of Oregon was found to be broadband (1.0 – 45  kHz) and comprised of a series of short duration (10–20  m) oscillatory signals that occurred in clusters lasting 2–3  seconds. The scientists plan to use the acoustic signatures of the bubble streams to estimate the volume and rate of methane gas escaping from the seafloor. 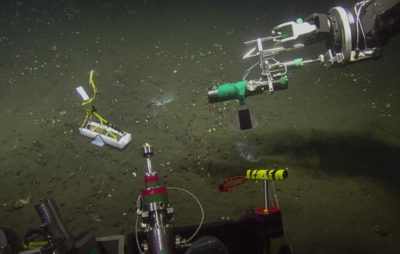 A hydrophone (acousonde) being deployed in a field of methane bubbles by the remotely operated vehicle (ROV), Hercules. Image credit: Ocean Exploration Trust and NOAA/PMEL.

The M3 project will use active acoustics, in addition to underwater camera systems, to monitor the natural release of methane off the coast of Oregon in real time and estimate bubble flux at the southern Hydrate Ridge. Scientists have deployed a specialized multibeam echosounder that is mounted on a tripod on the seafloor and can rotate 360 degrees to survey the ocean for methane emissions. Use of this technology was not previously possible, due to high power consumption rates in available systems. New technologies ensure lower power consumption rates, and the system is also connected to the Regional Cabled Array of the Ocean Observatory Imitative (OOI), which provides power supply and two-way communication with the instrument.