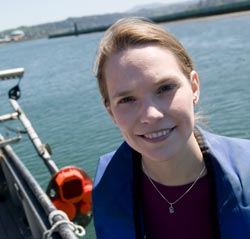 Dr. Kelly Benoit-Bird is a Senior Scientist at the Monterey Bay Aquarium Research Institute. Dr. Benoit-Bird’s research uses underwater sound to observe how animals ranging in size from nearly microscopic zooplankton to sperm whales interact with each other and their underwater environment. A major focus of what Kelly studies is predator-prey interactions. For example, some recent projects have examined Hawaiian spinner dolphins foraging on deep sea fish, squid feeding on fish and krill, and sardines feeding on copepods. As part of this work, she studies how the amount of prey and where it is located changes with time and the ways animals cope with this variability. Dr. Benoit-Bird is using both passive acoustics and active acoustics, along with photography and net trawls, to study a range of interactions between animals in the ocean.

This image shows the daily horizontal movements of the mesopelagic boundary community in black and the spinner dolphins in yellow. Image courtesy of Dr. Kelly Benoit-Bird.