Tutorial: How do you determine if a sound affects a marine animal?

Highlights: Determining Effects
Ecological risk assessment involves defining the problem; that is, determining what might cause ecological effects. Then, an estimate of the probability of being exposed to the problem and the type of potential ecological effects are used to estimate the risk. An example of the risk of the North Pacific Acoustic Laboratory source to humpback whales off Kauai, Hawaii is presented on the website.

There are many factors that influence if and how much a sound source affects marine animals. How loud the source is, what frequencies it transmits, where it will be used, and what species might be in the area are all factors that need to be considered. This process is called ecological risk assessment. The first step is to define the problem. This involves determining what might cause ecological effects. The next stage involves two steps, estimating the probability of being exposed to the problem and, based on that exposure, determining the types of ecological effects that are expected. Based on these results, the risk can be estimated.

In order to determine if a specific underwater sound source might affect a particular marine animal species, scientists begin by asking:

By combining the answers to these questions scientists can make an estimate to answer the following question:

Once the sound levels to which the animals might be exposed are known, scientists next ask:

If the sounds are within the animals’ auditory range, they may have an affect on them. The scientists then ask:

Scientists use data on the way in which the animals respond to similar sounds and sound levels to estimate how much the sound might affect their behavior. 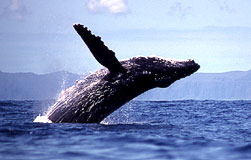 Humpback whales are commonly sighted in nearshore waters near Kauai, Hawaii during the winter months. Photo courtesy of Ann Zoidis.

For example, in the Animals-Effects section of DOSITS, there is a walkthrough of the analysis that was done to determine how the sound source for the North Pacific Acoustic Laboratory’s Acoustic Thermometry of Ocean Climate (ATOC) Project might affect humpback whales around the island of Kauai, Hawaii. This analysis was part of an environmental impact statement that was approved by the National Oceanic and Atmospheric Administration (NOAA) Fisheries Department that oversees environmental regulations. While this example relates to marine mammals, the exact same process could be used to analyze the effects on fish.