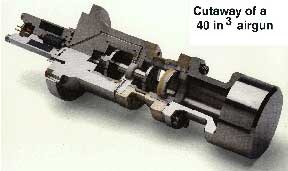 This image shows a cross section of a small airgun. Image courtesy of USGS.

An airgun is used to examine the layers of the seafloor to study the Earth’s history or explore for oil and gas. An airgun is designed to rapidly release compressed air, which forms a bubble. It does this in three basic steps shown in the series of figures below. The figures show the cross-section of a simple airgun. The body of the airgun, shown in blue, and the piston, shown in red, are cylinders. The control chamber is filled with high pressure air, about 142 atmospheres or 2000 psi. Because the top of the airgun body is narrower than the bottom, the high-pressure air in the control chamber forces the piston down. This seals the airgun shut. In the first step, high pressure air, shown in yellow, fills the firing chamber. An airgun is described by the volume of high-pressure air in the firing chamber (for example, a 40 in3 airgun).

When air pressure in the firing chamber is at the desired level, a valve is opened at the bottom of the airgun, allowing high-pressure air to enter below the piston. The high pressure in this area overcomes the sealing effect of the air in the control chamber, causing the piston to move upward. This releases the high pressure air in the firing chamber to the surrounding water. 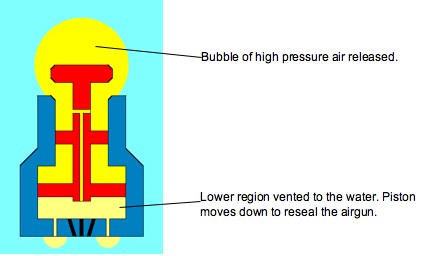 Airgun sound from a distance. This is the sound of air guns operating off Sable Island, Nova Scotia, but being recorded many thousands of kilometers away on the Mid-Atlantic Ridge. Note: This sound has been sped up by a factor of ten.
Courtesy of NOAA Pacific Marine Environmental Laboratory VENTS Program

The bubble pulses are considered noise. The sounds that they produce cannot be used to examine the seafloor. In addition, the sound from one airgun is generally not loud enough to give very useful information. Scientists can fix both problems by using a tuned airgun array. A tuned airgun array fires multiple airguns of different, carefully selected sizes at the same time. The direct sound arrivals from the guns add together to produce a much louder sound than the sound from just a single airgun. Since the bubble that each gun releases will be a different size, the bubble pulses cancel each other out, reducing this unwanted sound. An example of how the signals from an array is shown in the figure below. 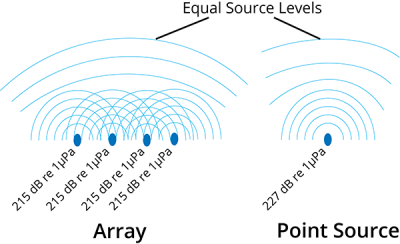 Comparison of source level for a projector array and a point source (single source). Copyright URI

The airguns in an array cannot be placed in exactly the same location, so they are spread out over a small area. How the array is designed depends on what layers of the seafloor are being studied. Scientists are interested in layers of the seafloor that are at greater depths than those of interest to oil and gas explorers. Because of this, scientists tend to use a small number of large volume airguns in order for the sound to penetrate deep into the seafloor. The oil and gas industry is interested in shallower layers, so they design their air-gun arrays with a large number of small volume airguns. 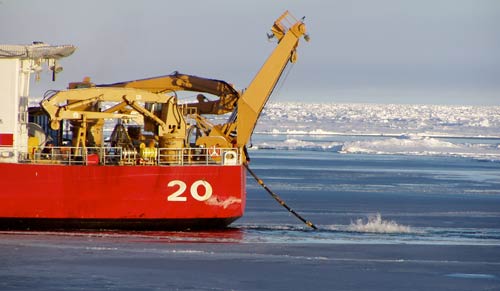