What are common underwater sounds?

Some sounds are present more or less everywhere in the ocean all of the time. The background sound in the ocean is called ambient noise. The primary sources of ambient noise can be categorized by the frequency of the sound.

In the frequency range of 20-500 Hz, ambient noise is primarily due to noise generated by distant shipping. Even after removing any noise generated by ships close to the receiver, distant ships can be detected. The amount of noise is greater in regions with heavy shipping traffic. There tend to be fewer ships in the southern hemisphere, and low-frequency ambient noise levels are generally at least 10 dB lower as a result. Noise generated by shipping has increased as the number of ships on the high seas has increased.

In the frequency range of 500-100,000 Hz, ambient noise is mostly due to spray and bubbles associated with breaking waves. It increases with increasing wind speed.

At frequencies greater than about 100,000 Hz, the noise generated by the random motion of water molecules, called thermal noise, dominates. This noise sets the ultimate limit to the minimum sound levels that can be measured.

The background sounds in the ocean can be summarized in a graph showing typical sound levels at different frequencies. The sound levels in this graph are in dB relative to 1 µPa in a 1 Hz wide frequency band, which is usually written dB re 1 µPa2/Hz. 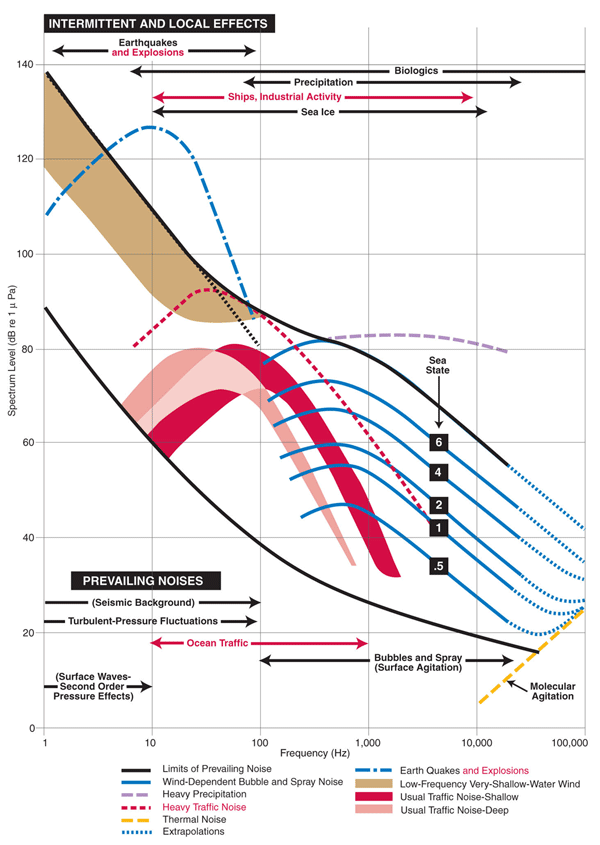 The typical sound levels of ocean background noises at different frequencies, as measured by Wenz (1962). This graph is therefore also referred to as the Wenz curves. The sound levels are given in underwater dB summed over 1 Hz wide frequency bands, which is often written as dB re 1 µPa2/Hz. Adapted (after National Research Council, 2003) from Wenz, G. M. (1962). Acoustic ambient noise in the ocean: Spectra and sources. The Journal of the Acoustical Society of America, 34(12), 1936–1956. Copyright Acoustical Society of America, reprinted with permission. 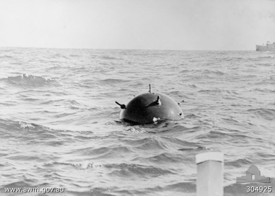 first installed underwater bells near lighthouses to warn mariners of navigational hazards. However, the systematic study of ambient noise did not begin until World War II. During WWII, acoustic mines were developed that were triggered by the sound of a passing ship. Accurate knowledge of ambient noise levels was needed in order to set the sound levels at which acoustic mines would be triggered, so that they would explode only when a ship was present. This need helped stimulate development of the calibrated receiving systems needed to measure ambient noise levels. Under the direction of Vern Knudsen, the director of the University of California Division of War Research, ambient noise measurements were made in coastal waters and harbors for frequencies from 1000 Hz to 50,000 Hz. They found that the noise level increases with increasing wind speed and wave height. For a given wind speed, the noise level decreases with increasing acoustic frequency. The curves summarizing their results became known as the “Knudsen curves”.

The dependence of ambient noise on wind speed at frequencies between roughly 1000 Hz and 50,000 Hz implied that measurements of ambient noise might be used as a tool to determine wind speed over the ocean. This principle was exploited many years later in oceanographic instruments given the name WOTAN, for “Wind Observations Through Ambient Noise.”

Unlike ambient noise discussed above, which is almost always present, some sounds are intermittent or only occur in limited regions of the ocean. There are a large number of intermittent sources of sound in the ocean, including natural physical processes, marine life, and man-made sources.

Please review the advanced topic on ocean noise budgets to learn more about the contributions of these underwater sound sources.

Physical processes that intermittently generate sound in the ocean include rain, cracking sea ice, undersea earthquakes, and eruptions from undersea volcanoes. A common occurrence, such as heavy rain, can increase noise levels from those created by bubbles and spray by up to 35 underwater dB across a broad range of frequencies extending from several hundred hertz to greater than 20,000 Hz.

The sounds produced by marine animals are many and varied. Marine mammals, such as blue whales and harbor porpoise, produce sounds over a wide frequency range, from less than 10 Hz to over 100,000 Hz, depending on the species of marine mammal. Many fishes, such as the oyster toadfish and plainfin midshipman, and some marine invertebrates, such as snapping shrimp, also produce sounds. Examples of these marine animal sounds can be heard in the Audio Gallery.

Marine animals use sound to obtain detailed information about their surroundings. They rely on sound to communicate, navigate, and feed. Marine mammals, such as dolphins, use sound to locate and identify objects such as food, obstacles, and other whales. By emitting clicks, or short pulses of sound, and listening to the echo, dolphins can detect individual prey and navigate around objects underwater.

Marine mammal calls can actually increase ambient noise levels by 20-25 underwater dB in some locations at certain times of year. Blue and fin whales produce low-frequency moans at frequencies of 10-25 Hz with estimated source levels of up to 190 underwater dB at 1 m. The ambient noise levels at frequencies of 17-20 Hz increase off coastal California during the fall and winter months due to blue and fin whale calls.

Spectrogram from a receiver on the continental slope off Point Sur, California, from January 1995 to January 2001,using 1-day averages. The increase in ambient noise at 17–20 Hertz during the fall and winter is due to blue and fin whale calls. (Reprinted with permission from Andrew et al. 2002.)

It is likely that many more species of marine life make and use sounds than we currently know.

Anthropogenic Sounds
Sounds generated by human activities are an important part of the total ocean acoustic background. Undersea sound is used for many valuable purposes, including communication, navigation, defense, research and exploration and fishing. However, some sounds are just a by-product of another activity, such as the noise generated by ships and by offshore industrial activities, including oil drilling and production.

The source levels for some sounds generated by human activities are given in the following table.