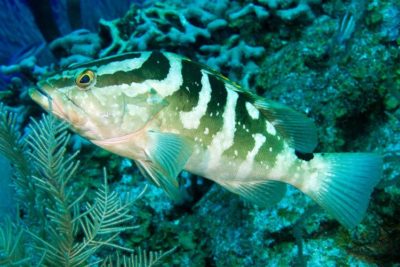 Nassau grouper are reef fish that reach up to 48 inches in length when mature. During the non-spawning season, adult fish are light beige, with dark brown, vertical bars, a large, black blotch on top of the base of the tail, and a row of black spots below and behind each eye (shown here). During their spawning aggregations, they exhibit three additional color phases and produce a variety of sounds associated with visual displays. Image credit: NOAA Fisheries.

The Nassau grouper is a large species of reef fish found in tropical and subtropical waters of the western North Atlantic, including Bermuda, Florida, the Bahamas, Yucatan Peninsula, and throughout the Caribbean Sea. These fish are top-level predators that feed on other fishes and invertebrates, and are often associated with hard structures such as reefs (both natural and artificial), rocks, and ledges.

Nassau grouper are late-maturing fish that can live up to 29 years and spawn in very large aggregations (hundreds, thousands, or even tens of thousands of fish). As spawning time approaches (December through April), adult fish move from the reefs where they live to specific spawning areas. Some fish travel only a few kilometers to reach an aggregation site, others are known to travel up to several hundred kilometers.

During spawning aggregations, Nassau grouper produce a variety of low frequency sounds associated with courtship displays, agonistic interactions, and distress or alarm. The fish produce a pulse train sound thought to be associated with distress or alarm. This call is comprised of six to thirteen pulses, with an individual pulse duration of 0.09 s, and average peak frequency of 77 Hz. Nassau grouper also produce a tonal sound (average peak frequency of 99 Hz) that lasts from 0.9-2.3 s. This sound is most often associated with courtship behaviors, and is sometimes accompanied by behavioral displays by males directed towards females. A third sound has also been recorded for Nassau grouper during an agonistic interaction of two males following a gravid female. This sound is composed of three parts beginning with a series of grunts, followed by paired pulses that have a rhythm that resembles the sound of a human heartbeat. The first part is composed of a series of repeated grunts with mean duration of 0.008, and average peak frequency 199 Hz, followed by alternating repetitions of part 2 (duration 0.01, 128 Hz) and part 3 (duration 0.02, 160 Hz).

In the video clip, a single bicolored fish is shown following an apparently gravid, dark phased fish. The pair was approached by a second bicolored fish, and an agonistic exchange took place between the two bicolored fish. Sound was also produced. After the acoustic—physical interaction, the original bicolored fish returned to following the dark phased fish while the other swam away The aggressive behaviors observed had been previously documented in between bicolored adult fish but associated sound production was previously unknown. Sounds and video recorded at Bajo de Sico, an offshore seamount located 27 km west of Mayaguez, Puerto Rico. As described in: Rowell, T. J., M. T. Schärer and R. S. Appeldoorn. 2018. Description of a New Sound Produced by Nassau Grouper at Spawning Aggregation Sites. Gulf and Caribbean Research 29 (1): GCFI22-GCFI26. DOI: 10.18785/gcr.2901.12