How is sound measured? 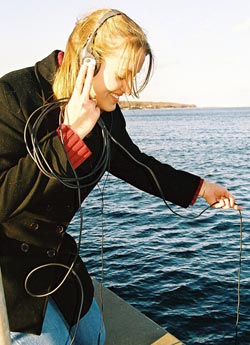 A hydrophone is used to listen to underwater sounds. Copyright University of Rhode Island.

People were listening to underwater sounds with air tubes as early as 1490, when Leonardo da Vinci wrote about it. It wasn’t until the mid to late 1800’s that the technology was developed to convert acoustic signals into electrical signals, however. This technology advanced enough that by World War II, British, French, and American scientists were using echo-ranging to locate icebergs and submarines. The ability to locate submarines was invaluable against the German U-Boats.

A hydrophone array can be towed behind a ship or placed on the seafloor. In this image, sound is transmitted by the ship and reflected off the submerged submarine. The reflected sound reaches hydrophone A first, then hydrophone B, and finally hydrophone C. The time-of-arrival-difference between the hydrophones in the array is used to determine the direction to the submarine. Copyright University of Rhode Island.

Hydrophones are specially designed for underwater use. They are normally encased in a rubber boot to provide protection from seawater. Hydrophones can be mounted in several different ways. They can be attached to a boat, towed, or placed in a fixed position underwater.

It is actually fairly simple to build a basic hydrophone.  Please visit the DOSITS Resources section to learn how to build a hydrophone.