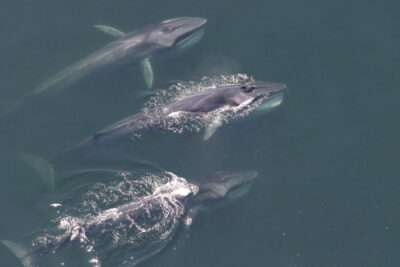 Fin whales have long, slender bodies; V-shaped heads; and a hooked dorsal fin located far on their backs, close to their tail. These whales feed on krill, small schooling fish, and squid by lunging into schools of prey with their mouths open, or by skim feeding closer to the water surface (shown here). Image credit: NOAA Fisheries.

Fin whales, with body lengths up to 24 m (80 ft), are the second largest whales in the world; only blue whales are larger. Their large size made the species a prime target for commercial whaling in the mid-1800’s. Currently, fin whales are listed as endangered, with a global population of approximately 100,000 individuals.

Fin whales produce a variety of low frequency sounds, some of which can be as loud as 190 underwater dB. The most commonly reported fin whale sounds are “20-Hz pulses” (also known as “A notes”), which have been recorded worldwide. These stereotyped, short duration (<1 s) calls are frequency-modulated sweeps that decrease in frequency from about 40 to 13 Hz and are centered around 20 Hz. They can be produced as single calls, or in doublets and triplets, with varying inter-note intervals (INI) of 6-37 s. Singlets have one, constant INI; doublets have two different INIs and sometimes different pulse types; and triplet patterns have a repeated series of three INIs, at least two of which are unique. The 20-Hz pulses may also include a higher frequency component (HFC) centered at 85 to 140 Hz. These higher frequency notes can be produced with and without a 20-Hz pulse. Other low frequency sounds (referred to as “back beat pulses” or “B notes”), which have a narrower bandwidth (18 to 20 Hz), have also been recorded, and are produced in a repeated series or in rotation with 20-Hz pulses. A “40-Hz call”, which is characterized by higher frequency, down-swept pulses, from 100 to 50 Hz, has also been detected, although not widely. These calls have been recorded in known feeding areas, with whales engaged in long dives or surface feeding activities. Passive acoustic studies have shown 40-Hz call rates to increase with increasing prey biomass. Thus, 40-Hz calls may function in a feeding context.

The detection of 20-Hz calls changes seasonally, and increases with the onset of the fin whale’s reproduction season. Only male fin whales are thought to produce these sounds. Males will produce the pulses in repetitive doublet or triplet sequences (song), with bouts lasting up to 32.5 hours. It is hypothesized that the 20-Hz pulses may serve a reproductive function. Individual songs are distinguished from each other by silent periods, which are 120-150 s in duration and occur every 10-15 minutes. These silent gaps are thought to coincide with the singer coming to the surface to breathe. The whales also produce 20 Hz pulses while swimming. Determining potential connections between fin whale swim speed, dive behavior, and sound production is an active area of research. Non-song counter calling and irregular 20-Hz calls have also been recorded and are usually produced by animals in groups.

Scientists use passive acoustic monitoring (PAM) to better understand fin whale presence and migratory patterns, especially in regions where traditional ship-based methods are limited. Such studies can include passive acoustic recording tags, archival recording units, gliders, bottom-mounted seismometers, ocean observatories, and other technologies. In the Northern Hemisphere, studies have found that fin whales aggregate in Arctic waters to feed during the summer. Some whales migrate south to winter breeding grounds, along routes that vary throughout both the North Atlantic and North Pacific. Acoustic data also show that some whales remain year-round in high latitude regions (Gulf of St. Lawrence and Nova Scotia), and the number of fin whales migrating into the Arctic appears to be increasing. In the Southern Hemisphere, PAM studies suggest a slow movement of whales out of Antarctic waters in the austral winter with whales migrating to Australia, New Zealand, and Chile. The whales then return to Antarctica during the austral summer.

Song patterns can be unique to fin whales in certain regions. Some scientists hypothesize that differences in call characteristics could identify different populations. For example, in the Western Antarctic Peninsula region of Antarctica, higher frequency components associated with fin whale calls occurred around 85 Hz; off the eastern Antarctic (30°E–150°E), these higher frequency components occur around 99 Hz. Fin whale song recorded off the coast of central Chile in the austral winter was composed of regular 17-Hz notes associated with higher frequency notes at 85 Hz. These data suggest the whales in Chile migrated from the western Antarctic.

Inter-note intervals, INI, which have been found to vary regionally, may also act as an acoustic identifier for fin whale populations. INI values of fin whale calls in New Zealand were similar to those recorded in Australia, suggesting a broad “acoustic population” of fin whales extending from New Zealand to southern Australia, and then south to Antarctica. Songs produced by fin whales in Southern California, the Bering Sea, and Hawaii were all characterized by singlet and doublet INIs that increased seasonally and then reset to the same shorter intervals in late summer/early fall. Changes in the dominant song pattern used by fin whales in the eastern North Pacific have also been observed. This suggests broad connectivity of fin whale groups across the region. However, individual fin whales often utilize several different song patterns. Fin whales in the central Pacific were found to produce songs with multiple INI patterns, and often changed their song patterns, even mid-song. More research is needed to better understand seasonal, annual, and regional changes in the acoustic behavior of fin whales.