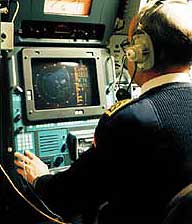 Sonar is used by ships and submarines to search the ocean. Sound is transmitted, and data is collected from the return echo of the sound. The first sound heard is of the emitted transmit pulse from the source. Reverberations or echoes are then heard returning from objects reflecting the sound in the ocean (See: How do people and animals use sound in the sea?). Sonar can be used to classify what is in the ocean around a ship or submarine. The length of the delay for the sound to return can be used to determine the distance of the object. The pitch can determine if the object is moving. In a process called the Down Doppler, a return echo from a target moving away will have a lower pitch. The reverse is true for an Up Doppler; the echo of a target moving towards the source will have a higher pitch.