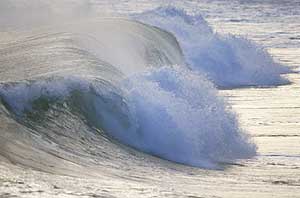 Breaking wave on a bea

“Waves are motions that carry energy, but not matter, from one place to another” – that is the definition of a wave from The World Book Encyclopedia.

I did a random “man on the street” type of interview and asked people what they thought about the sound of waves and came up with some very interesting and diverse descriptions of the sounds of waves – from the gentle sshhhh we hear when we put a conch shell to our ear to loud crashing, passion exploding, gentle soft rippling noises, loud dangerous noises, calming rhythmic rocking sounds, soothing melodies – just pick an adjective.

The library catalog does not show an entry for the sound or sounds of waves – it does however have an impressive collection of books about waves – seventy titles alone just about waves with twenty related subjects and thirty-five subheadings. There is one fiction book with the title The Sound of Waves by Yukimo Mishima.

I will leave you with a quote from Joseph Edgar Carpenter’s poem “What are the Wild Waves Saying” which seems to be as appropriate today as it was when it was written around 1813:

Sound of waves on a beach. Sound courtesy of OSAP/IOS CANADA.