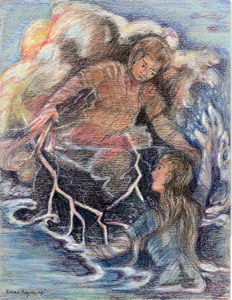 Imagine a rod of fire moving at a very high rate of speed causing the air around it to be heated to extreme temperatures of 50,000° F. to 54,000° F. As the charge travels through the air, the dramatic heating expands the air causing hydrogen atoms to explode. The shock waves from the explosions take place seconds behind the flash of light. We recognize the sound of the explosions as thunder following after a flash of lighting! When the rod impacts a body of water it produces sharp sound impulses underwater.

To the Micmac people, the indigenous people of Nova Scotia, the thunder and lighting represents the power of creation and the life force and energy of the world we live in. This interpretation represents the continuing water cycle, exchange of gases, and electrical impulses of the earth.

The “Thunders” to the Ojibway, the indigenous people of the Great Lakes area, are a sign to remember their grandfathers each time there is a storm. Thunder reminds people of many things, such as the stories their mothers told them about what or who was creating the loud sound to calm our fears. Scientifically we know that the production of fixed nitrogen is a byproduct of lightning, which is essential to the growth of plants.

This sound of lightning striking the ocean was recorded underwater in the Gulf of Mexico. Sound courtesy of Henry Bass, Roy Arnold and Anthony Atchley, National Center for Physical Acoustics.