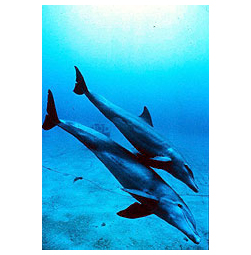 The Atlantic bottlenose dolphins are small cetaceans that have a long, beaklike snout, a falcate (sickle-shaped) dorsal fin, and sharp teeth. They are Odontoceti (toothed whales) and have one blowhole. These dolphins live in small groups called pods.

The bottlenose dolphin has been the subject of much study. Their clicks, quacks and whistles have been described. In addition, these animals may use both left and right nasal sacs independently, thus the right hole may whistle as the left clicks. It is now clear, that the use of sound is of primary importance to the Cetacea, and they have developed a wide series of different sounds and sonic techniques, which allow them to exploit fully the physical apparatus. In addition, the brain has evolved a very complex structure in relation to the reception and interpretation of sound. Structurally the cerebral cortex is similar to that of man.

Bottlenose dolphins send messages to one another in different ways. They squeak and whistle and use body language- leaping as high as 20 feet (6 meters) in the air, snapping their jaws, slapping their tails on the surface of the water, and even butting heads.

So what are they trying to tell each other? They can alert each other to possible dangers, let others know there is food nearby, and keep track of others in the group. Nasal sacs inside the dolphinís head are what make it possible for the dolphins to vocalize. Blowholes located in their heads open and close, allowing the dolphins to breathe. (Being mammals, dolphins have to come to the waterís surface to breathe, just like us.)

Each individual dolphin seems to have its own “signature whistle,” but the sounds we can’t hear may be the most important. Whistle-like sounds help dolphins keep in contact and communicate with each other as they travel and feed. Dolphins “echolocate” to find their food or to scan their surroundings. They direct “clicks” into the water and the clicks rebound off solid objects (fish, logs, boats) and echo back to the dolphins. Dolphins listen for the strength of the rebounding clicks to identify what the object is and its distance from them. All of these clicks and whistles are created in the dolphin’s nasal passages just below their blowhole. The sounds are received by fat deposits in the lower jaw. These deposits send vibrations of the echo to the middle ear and brain for processing. With echolocation, dolphins emit and process up to 700 clicking sounds per second to detect the size and location of an object hundreds of meters away.

Bottlenose dolphins also have a sharp sense of hearing. Scientists believe that the sounds travel through the dolphinís lower jaw to its inner ear and then are transmitted to the brain for analysis.

Can we talk with these animals? A lot of study has gone into bottlenose dolphin sounds. At one time some people believed that learning the meaning of the noises might allow us to talk to dolphins and train them to respond to words instead of sounds. Scientists have discredited that belief but continue to monitor “dolphin talk” as a way to better understand what makes bottlenose dolphins tick and click!

Dolphins will seek out the company of humans. It is a great moment for them to choose a human partner to work closely with. They especially seem to enjoy physical contact, and will often solicit back rubs from people.