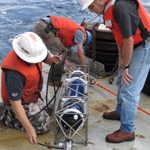 Physical oceanography is a sub-discipline of oceanography that involves the study of waves, tides, and currents; the ocean-atmosphere relationship that influences weather and climate; and the transmission of light and sound in the oceans. The scales of these processes range through spatial scales from centimeters to global and time scales from seconds to centuries.

Physical oceanographers seek to understand why, where, and how water moves, and the consequences of these movements. Their work may include interdisciplinary scientific investigations of ocean temperature, salinity, density, circulation patterns, currents, eddies, gyres, coastal processes and tides, winds, and/or waves. Physical oceanographers may also study the interaction between the ocean and its boundaries (land, seafloor, and atmosphere) and the relationship between the sea, weather, and climate. They may also examine they physical mechanisms responsible for the distribution of sea ice and polar ice sheets.

Physical oceanographers may have a variety of responsibilities depending on the specific nature of their job. These could include:

Basic skills and abilities may include:

Physical oceanographers use a variety of tools, including basic equations, computer models, instrumentation that measures ocean properties, remote satellites, and surface radar. They use a combination of acoustical, optical, satellite, and direct ocean measurements and techniques to conduct their work. For example, ocean currents can be measured using acoustics. Acoustic Current Meters are used to measure the velocity and direction of currents and waves. An Acoustic Dopple Current Profiler (ADCP) uses the Doppler effect to measure currents in the ocean. It calculates speed of the water current, direction of the current, and the depth in the water column of the current. This instrument can be placed on the seafloor, attached to a buoy, or mounted on a boat. RAFOS Floats are floating instruments designed to move with a current and track the current’s movements. The RAFOS Float keeps track of its own position by listening for the signal from sound sources in the water near the study area. The RAFOS Float uses the travel times of the sound from two or more sources to determine its position. It can be designed to float at different depths, allowing the vertical structure of the current to be studied. 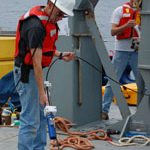 Dr. Worcester has been a Research Oceanographer at the Scripps Institution of Oceanography since receiving his Ph.D. in 1977. He was a Visiting Scientist at the Massachusetts Institute of Technology (MIT), Cambridge, MA, during 1983 and at Commonwealth Scientific and Industrial Research Organisation (CSIRO), Hobart, Tasmania, Australia, during 1989. His primary research interests are in acoustical oceanography and underwater acoustics. His work has focused on the application of acoustic remote sensing techniques to study ocean structure and circulation. He has been engaged in the development of the technique of ocean acoustic tomography since its inception, including the development and deployment of the required instrumentation. He has participated in numerous experiments applying the technique to oceanographic and acoustic problems in the North Pacific and North Atlantic Oceans, in the Greenland Sea, and in the Strait of Gibraltar.

NOAA, Ocean Service: what does an Oceanographer do?