Biological oceanography is the study of life histories of marine organisms, their relationships to one another, how they interact with and adapt to their environment, and the processes that govern their distribution in the ocean. Work in this field is interdisciplinary, as the relationships studied can be complex and the physics, chemistry, and geology of the ocean have important effects on organisms. Therefore, studies in biological oceanography often involve aspects of physical oceanography, marine chemistry, and marine geology.

Biological oceanographers may have a variety of responsibilities depending on the specific nature of their job. These could include:

To explore and define the roles of organisms in the marine environment, biological oceanographers may use a variety of research tools and techniques. These may include shipboard sampling, computer modeling, high-resolution video analysis, bio-optics, and/or acoustics. For example, archival marine acoustic recording units (ARUs) , such as the Ecological Acoustic Recorder (EAR), are used to monitor the ambient sound field of coral reefs and other tropical systems. Biological oceanographers may also use acoustics to study plankton. Plankton are relatively small organisms whose movements are dominated by currents, though many can swim. Sonar systems, similar to fish finding sonars , can be used to study plankton and fish abundance and distribution.

Marine fishes and mammals produce underwater sounds and scientists can listen for these sounds, using tools such as hydrophones, hydrophone arrays, and other passive acoustics sensors, and detect different marine animal species. acoustic gliders are a type of ocean glider that includes a hydrophone, can work continuously in all weather conditions for long time periods, possess a suite of high-resolution oceanographic sensors, and operate silently (because they do not have an engine or propeller). Researchers use acoustic gliders to study whale distribution, behavior, and habitat. Acoustic gliders have been used to study Sei whales , North Atlantic Right whales, and Beaked whales. They have also been used to track acoustically tagged fish. Estimating abundance (population size), animal density (number of animals per unit area), and the overall distribution of marine animals is critical to understanding marine ecology as well as making important and effective management and conservation decisions. 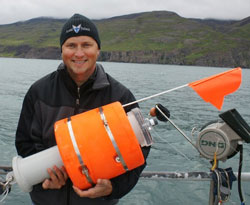 Marc Lammers is an Associate Researcher at the Hawaii Institute of Marine Biology and the President of Oceanwide Science Institute, a Hawaii-based non-profit organization involved in marine research and conservation globally. He is also on the Graduate Faculty of the University of Hawaii’s Biology Department and the Marine Biology Graduate Program, where he teaches and advises graduate students. His research interests are varied, but are primarily focused on marine bioacoustics and cetacean behavior. Dr. Lammers earned his PhD from the Department of Zoology at UH studying the acoustic behavior of dolphins and worked as a post-doc with NOAA’s Coral Reef Ecosystem Division in Honolulu where he led the development of the Ecological Acoustic Recorder (EAR). His work to date has yielded numerous scientific publications and he actively collaborates with researchers around the world. His interests in marine science are broad and range in scope from research to education and conservation. He has worked on projects focused on a variety of topics and marine organisms including corals, fish, turtles, dolphins and whales.

Science and Sound
Sounds in the Sea > How do marine animals use sound?